A view of Kenya’s water sector, from Kenya Water Week 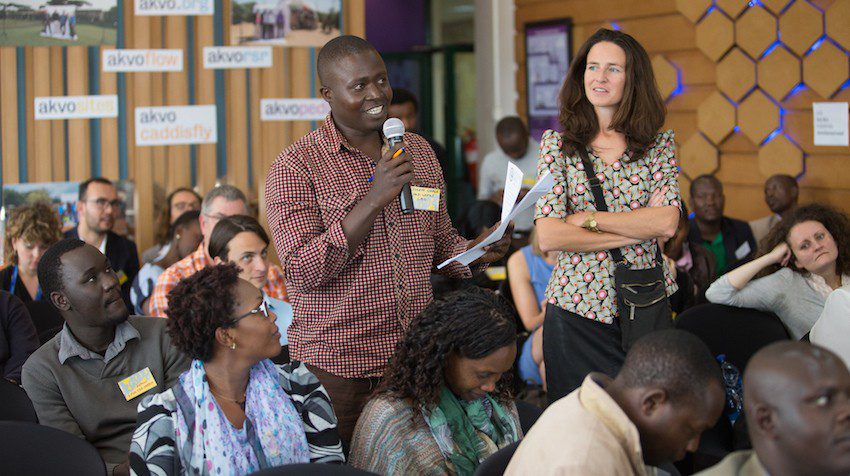 From aid to trade
was the title of the first ever Kenya Water Week, held in Nairobi from 21-25 November. Those familiar with Dutch development policy will not be surprised that there was a considerable Dutch delegation, as the slogan is embraced by the Dutch Ministry of Foreign Affairs. Panellists and presenters included members of, amongst others, the Netherlands Water Partnership (NWP), Vitens Evides International (VEI), Aqua for All and Akvo. The big (orange) Netherlands Pavillion was shared with other Dutch players such as SNV, Simavi, Wetlands International, Future Pump and Upande. For a little while, it felt like being in the Netherlands again.

Liliane Ploumen has been advocating for the move from aid to trade since she became the Dutch Minister for Foreign Trade and Development Cooperation in 2012. Kenya fits within that policy shift, at least on paper. In 2015 it acquired the status of lower middle-income county, with an annual income per capita of $1,046 to $4,125. The Dutch government responded by declaring it will phase out development cooperation and move towards more economically driven collaboration. During Water Week, visitors got a glimpse of what that could look like.

The Kenya Innovative Finance Facility for Water (KIFFWA) is a good example of this policy shift. Initiated by the Dutch government and implemented by the NWP, it offers early stage capital and financial expertise to financially viable companies involved in water. Another example is the Kenya Pooled Water Fund, one of KIFFWA’s first projects, which develops and finances bankable proposals for water utilities. In Kenya, where the average interest rate is as high as 20%, any initiative that makes it easier and more affordable to access finance, is welcomed with open arms.

The Dutch had more to offer than financial instruments though. Also represented in the Netherlands Pavillion was the Watershed programme (2016-2020), an alliance of Simavi, IRC, Wetlands International and Akvo, supporting civil society in eight countries around the world, including Kenya and Uganda. It is one of 25 strategic partnerships selected by Ploumen for her Dialogue and Dissent programme, and is built on the belief that a strong and confident civil society has a key role to play in holding service providers and authorities to account and ensuring equal access to public services.

In this respect, the Kenyan water sector is a very interesting one. Since March 2013, Kenya has a brand new governance layer to deal with: the counties – 47 of them, each with their own governor, parliament and ministers. There is also a new Water Act (2016) that has drastically revised roles and responsibilities in water resources management (WRM) and water supply. The latter is now part of the mandate of the counties, while WRM remains a responsibility of the national government, implemented by the Water Resources Authority (WARA). Though this devolution process is applauded by many since it distributes power more equally over the country, it also causes challenges in the field of coordination, governance and distribution of resources, especially since there is a chronic lack of reliable, accessible data that can inform policy and investments.

To enable civil society organisations (CSOs) to hold service providers and authorities to account, the Watershed team in Kenya will start with clarifying what the roles and responsibilities as laid out in the new Water Act exactly are. CSOs will, moreover, be trained how to analyse and use existing data to build effective evidence for their lobbying and advocacy agendas. The consortium will also help create formalised spaces where service providers, local authorities and CSO’s can constructively engage with each other and jointly reflect on evidence and learn from it. With initiatives like Watershed, the Dutch government hopes to contribute to more evidence-based, inclusive decision making focussed on the long-term goal of reaching universal access to water and sanitation for all by 2030.

Amidst all the hustle and bustle of the Water Week, the Akvo Kenya Foundation held a Track Day, where it showcased one of Akvo’s latest innovations: Akvo Caddisfly, a simple, low cost, smartphone-based water quality testing toolkit.

Providing people with access to reliable and safe drinking water is still one of the bigger challenges service providers worldwide are faced with. Millions of people are exposed to water contaminated with fluoride, chromium, e-coli and heavy metals without even knowing it. Assessing the quality of water is time-consuming and expensive, as proper laboratories are often far away and test results vary in quality. As Chris Omondi Juma, Director of Water Resources at the Kenyan Ministry for Water and Irrigation said at the Africa Water Week in July this year: “We need reliable water quality data at the source”. This becomes possible with Akvo Caddisfly. 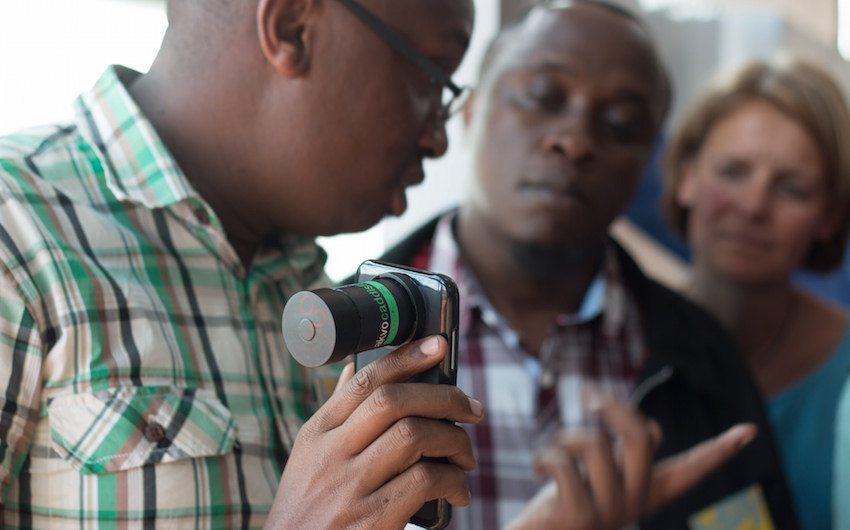 During a well-attended event at Nailab, participants were introduced to Caddisfly’s three main types of water quality tests: 1) colorimetric testing using special hardware and reagents, for fluoride and residual chlorine; 2) colorimetric testing with strip tests, for any parameter for which strip tests are available and 3) sensor-based testing, for dissolved salts. People were invited to bring their own water samples for live testing and a crowd gathered on stage to witness the test results. Fortunately, no fluoride or other contaminants were detected in the Nairobi water samples.

Interest in using Caddisfly was expressed by diverse development organisations, especially those working in remote areas and emergency situations. AfricAqua, a social business dealing with water treatment, distribution and delivery, appreciated Caddisfly especially as a tool for water quality monitoring and to identify suitable areas of operation. It was moreover encouraging to hear representatives of both the Ministry of Water and Irrigation and the Ministry of Health recognise and acknowledge the added value of and need for Caddisfly in the field, complementary to existing, more conventional test methods.

It was very interesting to engage a full week with water experts from Kenya, the Netherlands and other parts of the world. It showed once more the diversity and quality of services and products that the (Dutch) water sector has to offer, and Akvo can be proud to be a part of that.

Tabitha Gerrets is an Akvo programme manager, based in the East Africa hub. You can follow her on Twitter @tabithagerrets.