As part of the Akvo Caddisfly suite of water quality tests, Akvo has created an automated way of reading and interpreting strip tests using a mobile phone. The test results are geotagged and directly uploaded to the Akvo Flow database.

Strip tests are narrow plastic strips with active patches that change colour when a certain substance is present in a water sample. They are convenient, fast, cheap, and available for a large range of parameters (see, for example, producers Hach, Merck, and LaMotte). Akvo wanted to enable our users to make use of this wealth of products by integrating strip test measurements into our Akvo Caddisfly and Akvo Flow products.

The method uses a generic, inexpensive plastic card with calibration colours, on which the test strip is placed, as shown below. The Akvo Caddisfly app automatically takes images at the required times, calibrates the image, and interprets the results.

At the moment, the software supports measuring chlorine, iron, nitrate/nitrite and pH. The method can be easily adapted to any kind of test strip available, by adding the data for the strip to the Akvo Caddisfly app.

As water quality measurements are usually done as part of a survey, we made sure to fully integrate the strip test measurement within Akvo Flow. In the Akvo Flow dashboard, a user can create a Caddisfly question as part of a survey, and specify which strip test he or she wants to use. When the survey is carried out on the phone, the right test is automatically selected. After the measurement is complete, the interpreted data is sent to the central Akvo Flow database, where it can be investigated and exported to reports in different formats, for example Excel and csv. 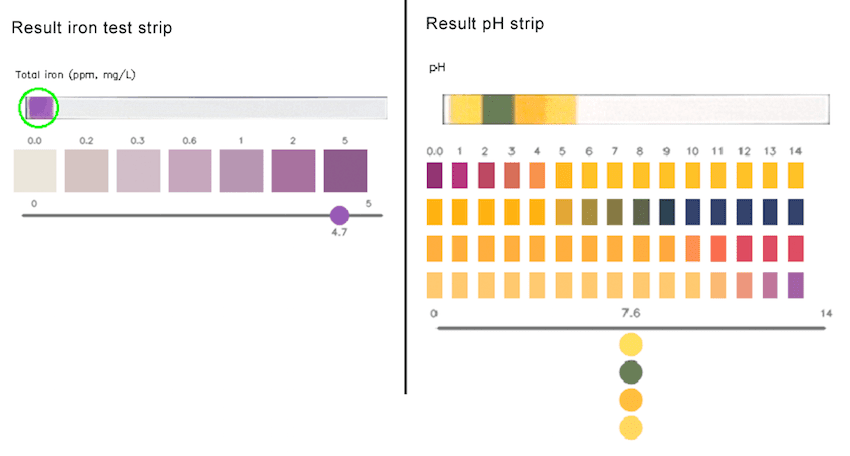 Above: example result images for two different strip tests. Left: total iron (HACH range 0-5 mg/l). Right: pH (Merck, range 0-14). The colour blocks used for the interpretation are shown in addition to the actual image of the strip. The pH test is special as it uses four different patches that all measure pH, but are sensitive to different ranges. The app uses all patch colours together to arrive at the final result.

In addition to the numerical results, the data that is sent back to Akvo Flow includes an image that summarises the results and the colour blocks used for the interpretation. Two of those images are shown above, one for a HACH strip test for iron, and one for a Merck pH strip test.

We believe that this method can play an important role in enabling large-scale screening of water sources for a range of parameters. Results are captured as part of a survey, which can also capture other relevant information, such as GPS location of measurement, time and date of measurement, name of location, and other relevant information. The measurement data is directly synced to the central Akvo Flow database, so results are available in real time for interpretation and storage. In addition, the data captured includes the photo of the test strip, so additional checks can be done once the data has been synced to Akvo Flow.

The method reduces scope for human variability and error, such as measuring the wrong patch, measuring at the wrong time, or differences in colour intepertation. In addition, about 8% of all males suffer from colour blindness in some form (only 0.5% of females), meaning that using strip tests on a large scale would be difficult without an automated method in the case of male enumerators.

Strip test are often called ‘semi-quantitative’, as the precision of strip tests is limited to about half a colour block. This means that strip tests should not be used or interpreted to get a precise numerical result – that is usually done in the lab or with much more expensive field test equipment. This is a clear limitation. Strip tests should therefore primarily be used as a screening tool, indicating if a result is placed at the ‘low end, middle, or high end’ of the scale. As the high end of the scale of many strip tests corresponds to a drinking water quality limit, this is usually sufficient to know if a parameter satisfies guidelines or not.

In practice, it might be logical to screen all water points using strip tests, and to take samples that show a high value to the lab. In that way, a much larger number of water points can be tested than if only (expensive) lab tests are available. This can optimise a monitoring process substantially.

The strip test method has been in development since June 2015. Early this year, we started a number of field tests of the method in Myanmar, Tanzania, Ethiopia and Mali. In Mali, 20 enumerators were trained to use the kit, and in total 350 water points were tested. 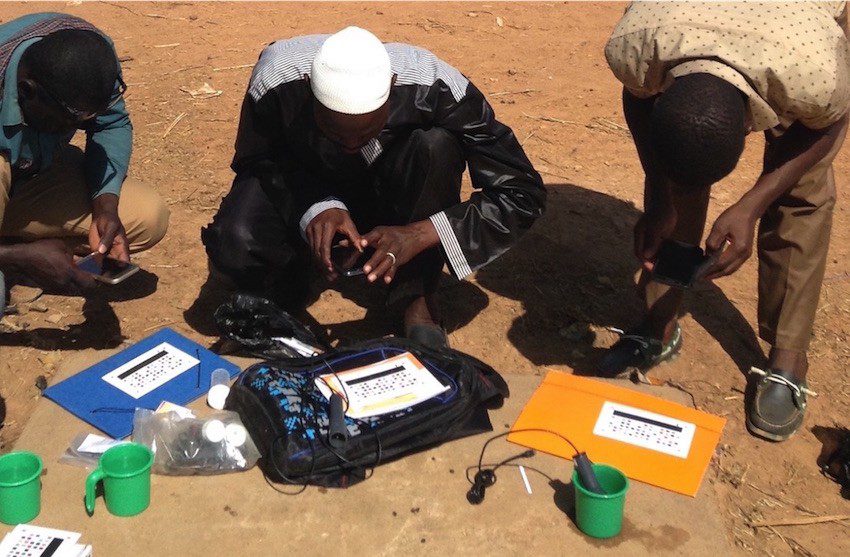 Above: Enumerators in Mali measuring strip tests for iron and nitrate/nitrite using Akvo Caddisfly.
Below: map with strip test results for nitrate in a region in Mali. 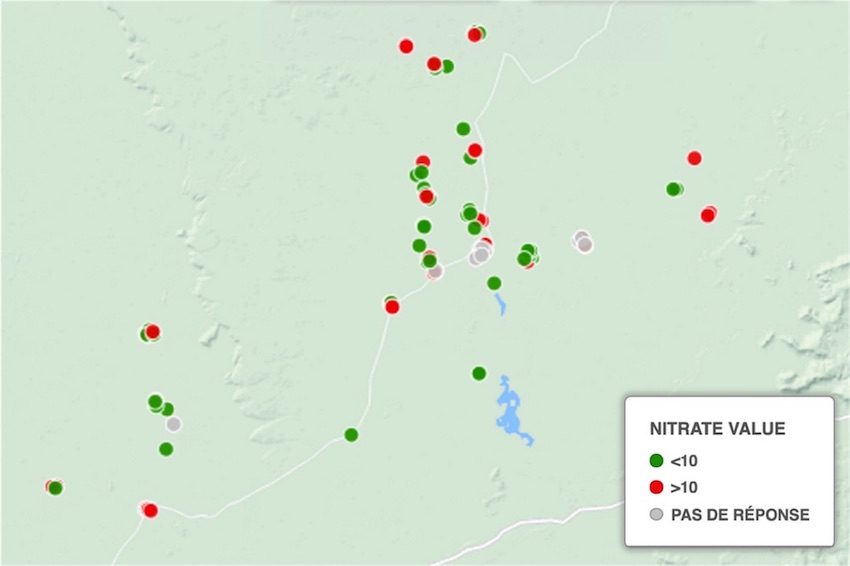 When the resulting data is plotted on a map, as shown above, it can be used to spot any clusters of water points that might have a higher concentration. In this way, it is easier to plan follow-up actions. More information on this pilot is available here.

Mark Tiele Westra leads the Akvo product team. He is based in Amsterdam. Follow him @mtwestra.