In July, ICCO, a leading NGO in the Netherlands, decided to field test Akvo FLOW in Indonesia. They wanted to conduct a baseline survey on food security. Needless to say, the opportunity was exciting. It would be a first in many ways. Though Akvo FLOW’s genesis lies in water, sanitation and hygiene (known as “WASH” amongst its devotees), it is a sector/issue agnostic tool. This is one of the first examples of how it is being used for monitoring in other sectors, and we are happy to see demand from a broader constituency.

Secondly, it would be our first Southeast Asia project. That’s quite a feather in the cap, as Akvo FLOW has never been used in this region before. It was interesting for us to understand whether the region itself posed any new challenges.

A series of Skype calls, emails and meetings in Amsterdam helped us define the focus of application and the dates of the training. The survey would be based on the Household Food Insecurity and Access Scale (HFIAS), which employs a simple set of nine questions to measure food insecurity. Since the questions were all set from before, and surveyors knew what questions they had to ask, we decided to cut down the training period to four days from five.

The training was hosted by ICCO, and use of Akvo FLOW was to be implemented by its partners in North Sumatra. The training was hosted in Medan, the capital of North Sumatra. The trainees were from ICCO partner organisations, though only two – PESADA and HAPSARI – were supposed to use FLOW post-training. The trainees were a mix of incredibly energetic and experienced staff and consultants.

Language was the first stumbling block for me. English is not commonly spoken, though the Bahasa Indonesia script is exactly similar to the 26 letters of the English alphabet. This meant that the training had to be paced accordingly. And as we scale and intensify trainings, I increasingly realise that a visually appealing Akvo FLOW training presentation will help us to tide over such linguistic bottlenecks.

As always, there were moments of crises. And, as always, it was either related to Java installations, or slow Internet. In fact, the nature of the problems was exactly similar to my earlier experience in Kenya. Though we generally recommend that trainees upgrade their Java/web browsers before the training, I have now realised that sometimes it’s too much of an ask. Often we work through donor networks. This means that many pre-training preparations are not easy, as it involves coordinating between different organisations all caught up with their respective workloads. As the Akvo FLOW online guide gets into shape, we need to add an easy to follow section that deals with pre-training preparations.

After the training, we field tested FLOW and it worked without a glitch. But during the field training, I realised that the session on phone management is becoming more and more important that ever before. It’s not just about battery management, but also about catching a proper 3G bandwidth for submitting data.

The training ended with group exercises and presentations. I admit that language issues had worried me but after the presentations, I was much more relaxed.

The ICCO Akvo FLOW training broke new ground for a particular reason. At the end of the training, Heny Soelistyowati, the dynamo who powered ICCO’s engagement with FLOW in Indonesia, asked me if it was possible to make the survey available in Bahasa. After all, the English and the Bahasa alphabets are the same, so why not? That was logic enough for me. In fact, both Heny and I agreed that surveyors/data collectors would find it easier. And so the team gave it a shot. In a matter of just an hour, we had our first full-fledged Bahasa Indonesia survey in Akvo FLOW. Moreover, creativity was at its peak that evening, we also kept the English questionnaire intact, but translated all the questions into Bahasa in the tool tip. 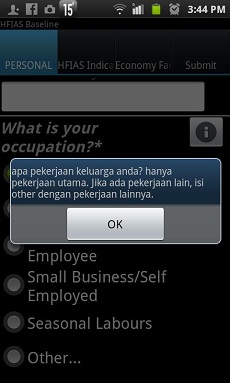 Data collection began almost immediately after the training and ICCO and its partner networks sustained it. As a result, by the 13th of November, essentially within one month, data collection had been completed for 250 households. And all this happened with very minimal backstopping and handholding at my end. This goes to show how evolved Akvo FLOW is at this point in time.

What made it work?

Finally, when I look back the Indonesia training and subsequent use of Akvo FLOW, I realise what really made this data collection a success:

(a) Organisational Commitment: Hat’s off to ICCO for that, for they kept on track and egged the data collection team on and monitored progress regularly on the dashboard.

(b) Clarity and Purpose: It was a baseline survey, with predetermined and well-established indicators, which were simple. The result was a questionnaire that was short and to the point. There was a deadline and everyone who collected data was more or less on the same page with regards to which data to collect and why.

(c) Language: I believe that availability of the survey in Bahasa did make it easier for the survey team. There was less time taken by the interviewer to understand questions and then translate them for the interviewee.

(d) Good infrastructure:  There was generally good connectivity, be it wi fi or 3G. The offices of partner NGOs had IT systems in place.

As the data collection in North Sumatra has ended, ICCO may now take forward another data collection exercise using Akvo FLOW next year in Java (the place, not the programming language!). As we move on, I strongly believe that ICCO Indonesia will emerge as one of the most prolific users of Akvo FLOW.

Amitangshu Acharya is a consultant, Asian programmes, for Akvo

Updated 17 December: A couple of tweaks by Mark Charmer, to improve clarity to techie and non-technie audiences.