We’re working to build out a series of photographs featuring teams of people using Akvo tools to do cool stuff, in the months to come. Rather than create a clonky PDF of the photographers’ brief, we’re keen to get ever more of our comms and support documents online, and decided to post it to the blog instead. So here goes…

Akvo is a non-profit foundation with staff in the Netherlands, Britain, Sweden, Kenya, India, Spain, Finland and the United States. Akvo’s tools are open source and used by over 870 organisations throughout the world (our network of partners) for better programming and reporting in areas such as water, sanitation, health, education and economic development.

Akvopedia is a portal for online knowledge on effective, low-cost, sustainable water and sanitation technology and approaches.

The purpose of this shoot is to capture images that highlight talented, forward-looking international development teams using Akvo tools to do cool stuff around the world.

The pictures should frame these groups of people in their own context. They will act almost as an ad campaign for Akvo partners and will be featured in a new “Action Hero” box we’ll be establishing on the home page of our new website, linking to online information about that team. They’ll also be used on- and offline in other training and promotion materials.

The images will be used individually and as part of a composite set which grows over time and which communicates the range of diverse contexts in which Akvo partners work.

We conducted a test shoot in London in March 2013. You can read more about that in this blog and see a selection of images from the shoot in this Flickr set.

[ Update January 2014: You can see images from some shoots that have now taken place here, here, here and here.]

The images should convey a sense of professionals with a pioneering spirit; interesting, intelligent people who care about what they do and are trying out new things, driving things forward, and being honest about their journeys.

The shoot is staged but should also be relaxed and spontaneous. This means engaging with the unexpected, such as when a dog ran into shot in our London test shoot (see below). 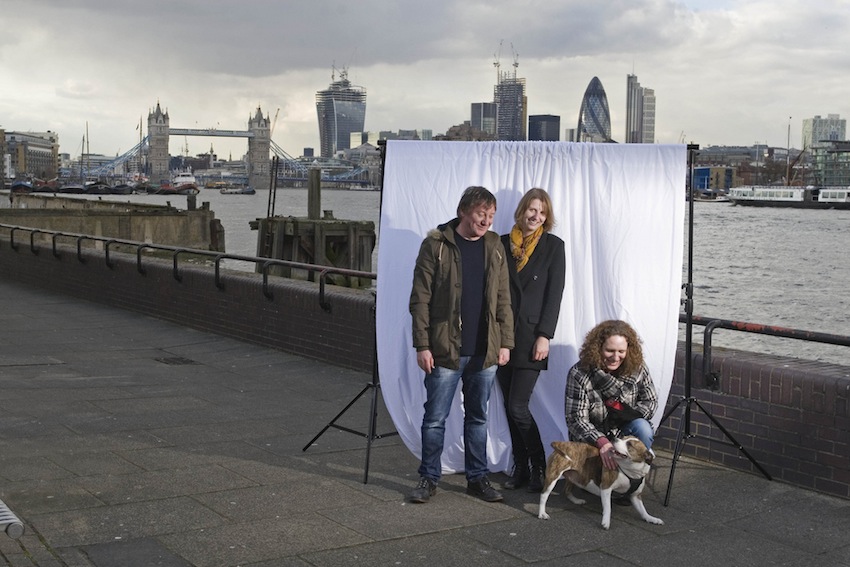 Photographs should be shot outside and should show the team in the context of the environment in which they work – and have a distinct sense of place, region or country. The location will be identified by Akvo in conjunction with the photographer and the team being photographed. Please flag up any potential problems before the shoot.

On the roof of a UN Habitat building in Nairobi, overlooking the city (Akvo Openaid)

A street scene in The Hague (Akvo Openaid)

A village meeting in a rural environment (Akvo RSR)

The photographer should supply a simple white backdrop (see image), which can be easily moved around. The backdrop should be set up outside, in an environment familiar to the team being photographed. The team poses in front of the backdrop, with at least one of them holding a device or object which they use on a daily basis in the course of their work and/or when using Akvo tools.

The photographs should all be landscape-orientation panorama shots. This means the environment around the backdrop will still be very much visible. The backdrop will form a ‘frame’ around the team, which will put the emphasis on them.

We will be using the images in different media and on different devices so a few different sizes and angles of shots would be helpful as that will give us more creative movement in post production.

The background can contain people and other activity too – indeed this could make the photos more interesting and dynamic. The photographs will be the highest definition photographs we will have of these teams. They should be crisp and sharp, to enhance this ‘high definition’ feel.

Each team shoot should take approximately 2 hours including any time you need to set up on location.

The photographs will be used on our website, where they will be displayed in a 5:2 ratio (see image below). In the photograph there should be enough ‘blank space’ to feature a text box as shown in the picture above. The placing of this text box is not static – it could be moved to cover another area of the picture.

Although the ability to use the photograph in a 5:2 ratio is a minimum requirement, photographs could be wider than the image shown above. The picture could extend to the left or right, top or bottom. This will be masked in the 5:2 ratio image, but visible when used in other materials.
The size of the photos should be at least 2500 pixels wide in the 5:2 ratio. If the image is wider, the pixel count should be proportionally higher. Photos will be used in printed materials and should be at least 300 pixels per inch.

Akvo discourages the use of digitally manipulated images (our business is openness and transparency). While photographs can be enhanced in terms of contrast and exposure, their content should not be air-brushed or otherwise manipulated.

Due to the fact that Akvo and all its work is open-source, we require full worldwide rights across all platforms. The images will be published by Akvo under a Creative Commons CC-BY-SA-NC license.

Please note we’re focused on implementing this – it isn’t a request for proposal from photographers. We just wanted to share the brief we’re working to with our partners and others who are involved, so it’s easier for everyone to refer to.

This blog was updated on 10 and 29 January 2014 to include additional information and links to images from shoots that have now taken place.

Jo Pratt is communications manager at Akvo, based in London.