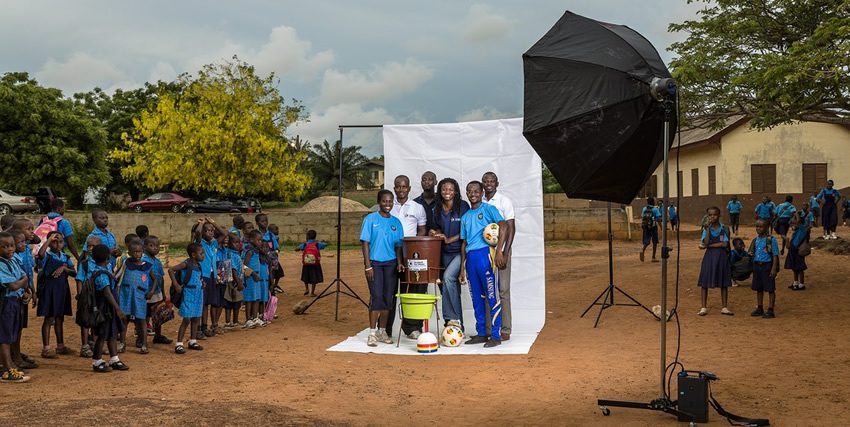 [Edited 16 August 2016 to increase image size, updated 6 May 2015 to include high resolution video]
The aim of the Akvo partner heroes project is to create a series of photographs and video that highlight and celebrate teams of professional people around the world who are doing really great work to reduce poverty and improve living standards – and using Akvo tools to help them do it. The pictures should frame these groups of people in the context in which they usually work.

This is consciously and deliberately different to most of the photography associated with our sector which nearly always focuses on the beneficiaries of aid programmes, particularly children. We’ve turned the camera lens in a different direction, to focus on the professional teams who are creating positive changes on the ground.

We are featuring the images prominently on the homepage of our website, linking to online information about that team. They’re also being used on- and offline in other materials. Together, they form a composite set which grows over time and which shows the range of diverse contexts in which Akvo’s partners work.

Set up
The photographer should supply a simple white backdrop which can be easily moved around. The backdrop should be set up in an environment familiar to the team being photographed. The team poses in front of the backdrop, with at least one of them holding a device or object which they use on a daily basis in the course of their work and/or when using Akvo tools. Only members of the partner hero team should be framed by the backdrop in this way.

The photographs should all be landscape-orientation panorama shots. This means the environment around the backdrop will still be very much visible. The backdrop forms a ‘frame’ around the team, which serves as a device to put emphasis on both the partner heroes and their environment. It also works as a motif to link all the photo shoots in the series. 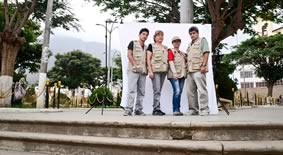 There should be a balance of lighting between the team and the environment. This will probably require use of a portable flash unit. Please note, there may not be access to electricity at the location so please bring a portable power source if you need one.

We will be using the images in different media and on different devices so a few different sizes and angles of shots would be helpful as that will give us more creative movement in post production.

Please make sure you capture images of the entire team in different positions and set ups. It’s also nice to take pictures of smaller groups and/or individual portraits if there is time, especially if the partners taking part feel that this will be useful for them.

The background can contain people and other activity too – indeed this can make the pictures more interesting and dynamic. The photographs will be the highest definition images we will have of these teams. They should be crisp and sharp, to enhance this ‘high definition’ feel.

High resolution video (New)
As well as static photographs, in 2015 we want to capture ‘moving’ photos. This means framing a shot on a tripod as if you were taking a photo and then taking a high-resolution video at 60 frames per second so that the shots can be slowed down in post-production. There should be several moving photos of around 30 seconds each, including different poses and set ups (the same ones as the static photographs). We only really need one really good one from each shoot, but it’s a good idea to capture several to make sure we get what we need.

Sensibility
The images should convey a sense of professionals with a pioneering spirit; interesting, intelligent people who care about what they do and are trying out new things, moving forward, and being honest about their journeys.

The shoot is staged but should also be relaxed and spontaneous. This means allowing people around the shoot to carry on their life as normal, wander in and out of the frame and react naturally to what’s going on. Some of the nicest pictures include curious bystanders responding to the situation. Here’s a good example from Colombia: 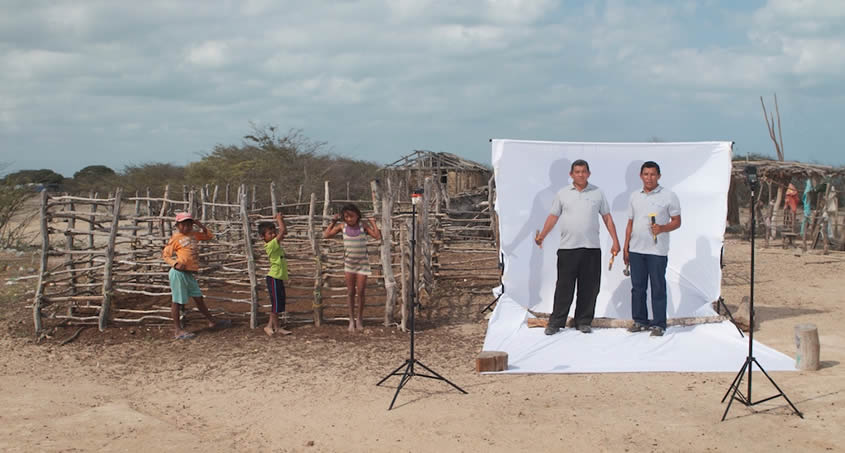 It also means engaging with the unexpected, such as when animals wandered into the shot in this picture from the Red Tic shoot in Bolivia:

Locations
Photographs should show the team in the context of the environment in which they work – the environment is almost as important as the team themselves. The backdrop acts as a device to emphasise both the team and their environment simultaneously. The pictures should also have a distinct sense of place, region or country. The viewer should be able to tell roughly where in the world the image was taken. 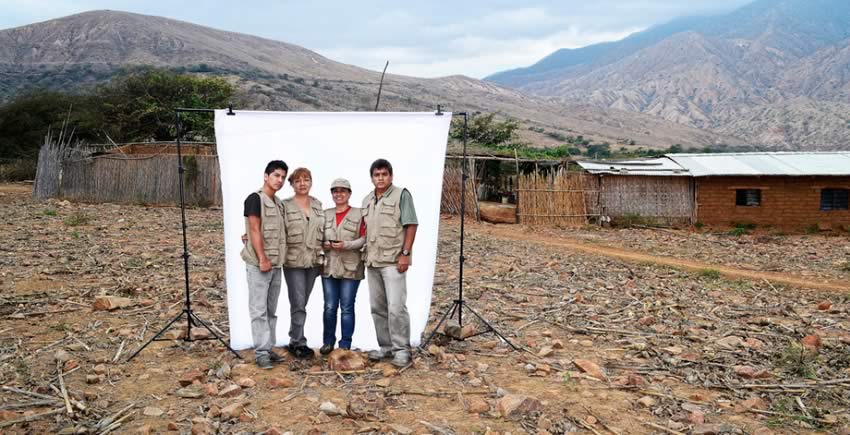 The locations will be identified by Akvo in conjunction with the photographer and the team being photographed. In most cases, there will be two locations for each photo shoot. Please flag up any potential problems before the shoot. As many of our partners work in very remote places, it is likely that some cross-country travel will be involved. However we aim wherever possible to select places that allow everyone to travel to and from the location(s) and conduct the shoot all in one day. If that is not possible – for example if it is not advisable to conduct the shoot in the middle of the day – please flag this up for discussion during the planning stage.

Sizing, measurements and lay-out
The photographs will be used on our website, where they will be displayed in a 5:2 ratio. In the photograph there should be enough ‘blank space’ to feature a text box as shown on our homepage. The placing of this text box is not static – it could be moved to cover another area of the picture.

Although the ability to use the photograph in a 5:2 ratio is a minimum requirement, photographs could be larger than this. The picture could extend to the left or right, top or bottom. This will be masked in the 5:2 ratio image, but visible when used in other materials. For these particular uses, photos should be at least 2500 pixels wide when cropped to the 5:2 ratio.

(New) Because we also want to be able to use the images for large size printing (like banners for exhibitions), some of the photos should be shot with as high a pixel count as possible. We’d like to be able to print the photos with a minimum height of one meter, at 300 pixels per inch. If you can deliver larger images, then that would be even better.

Akvo discourages the use of digitally manipulated images (our business is openness and transparency). While photographs can be enhanced in terms of contrast and exposure, their content should not be air-brushed or otherwise manipulated.

Due to the fact that Akvo and all its work is open-source, we require full worldwide rights across all platforms. The images will be published by Akvo under a Creative Commons CC-BY-SA-NC license. Photographers will be asked to sign a Letter of Agreement outlining these terms.

Tips and advice from previous photographers
Photographers that have already participated in this project have fed back the following advice:

1. If possible, have a good recce of the site before shooting. Know the place well and have alternatives in case the first preference doesn’t work.
2. Try and shoot when the wind isn’t strong as it can turn the backdrop into a sail.
3. Try and get the partner heroes as comfortable as possible before the shoot and shoot them in different positions.
4. Make sure the partner heroes carry their tools of trade to the shoot.
5. Use a portable flash to ensure the lighting is balanced between the team and the background.

Who is Akvo?
Akvo makes internet and mobile phone tools that are used by organisations working to reduce poverty and improve living standards in different parts of the world. Our tools are used to report on projects and monitor progress and outcomes, to share information widely, to increase transparency (so people know how and where aid money is spent and what it achieves) and generally to help humanitarian programmes work better.

More than 1000 organisations use Akvo’s products. This includes very large organisations such as the United Nations, national governments and international charities on the one hand, and small local organisations on the other. We refer to the organisations that use our tools as our ‘partners’.

Akvo tools
Akvo Really Simple Reporting (RSR) makes it easy to bring complex partner networks online and enable field and support teams to share status updates about their projects. Akvo FLOW allows field surveys to be managed and carried out using Android smartphones, with results shared online in dashboards. Akvo Openaid enables governments and multilateral organisations to present aid-spend data online in ways that are easy to navigate and that help them meet transparency obligations. Akvopedia is a portal for online knowledge on effective, low-cost, sustainable water and sanitation technology and approaches.

Further reading
The story behind the Akvo partner heroes project

Please note – this isn’t a request for proposals from photographers. We just wanted to share the brief we’re working to with our partners and others who are involved, so it’s easier for everyone to refer to.
Jo Pratt is communications manager at Akvo, based in UK.