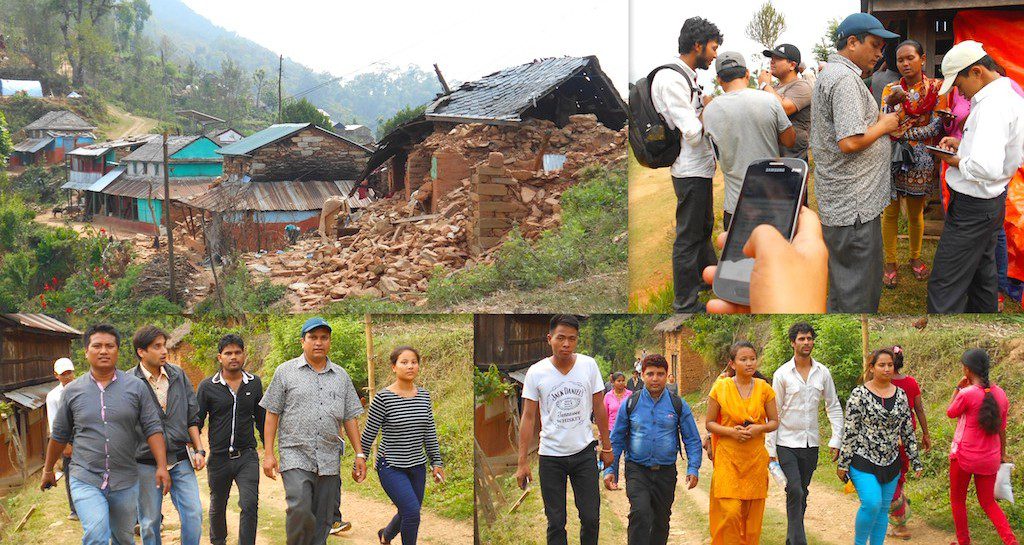 Everyone wanted to help. Everyone wanted to support. And as anticipated, heaps of support entered the country, even generated internally, and we saw like never before, tremendously unorganised and poorly coordinated system working amidst devastation. Lack of knowledge about on-the-ground realities and unavailable data for planning the response were major reasons for this chaotically “hung” situation. To avoid it from worsening further and support in our own way, we started bringing in together all our partners who were using Akvo tools to make them useful for assessing all sort of ground information and bring it into a platform to share among all concerned.

In this course, Nepal WASH Alliance (NWA) was also informed about the support we would extend in case any of their partners would like to go for an assessment on damage and other informative pieces. Positively, Nepal Water for Health (NEWAH) did in fact show interest in using Akvo FLOW for mapping WASH (water, sanitation and hygiene) status and damage in its intervention VDCs of Gorkha district. Gorkha is one of the most affected districts and Barpak, the first epicenter of this mega earthquake, is one of the villages in Gorkha. NEWAH has been actively working in fourteen villages of Gorkha district in its Increase Access to Water through Rain Water Harvesting initiative, including piloting the “3R Approach” and Increasing Access to Improved WASH in Nepal project supported by Rain Foundation and SIMAVI respectively. Hence, it was decided that the assessment would be done in these fourteen villages after designing assessment questionnaires, enumerator orientation and a field test. For this, Sector Efficiency Improvement Unit (SEIU) under Ministry of Urban Development supported the mobile devices needed for data collection. 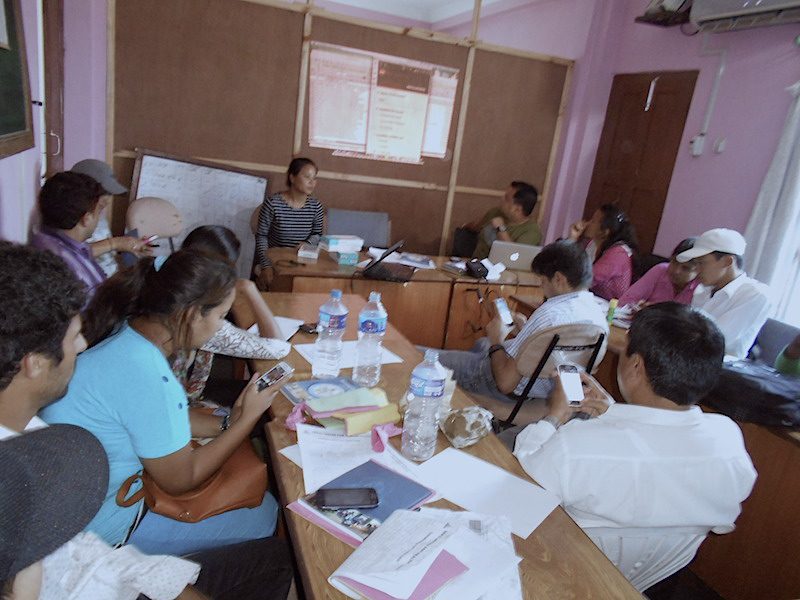 After reaching Bharatpur (regional office of NEWAH from where the projects in Gorkha is supervised) on 5 May 2015, I sat down together with their monitoring team to design and digitise questionnaires for the assessment. By the end the of the day, we finalised five set of rapid surveys – VDC (Village Development Committee) Level Information, Public Institution Assessment, Temporary Shelter Assessment, Rain Water Harvesting (RWH) System Assessment and Water Supply (WS) Scheme Assessment. Next day, I with Mr. Taranath Paudel, PME Officer at NEWAH to orient a team of sixteen people who were assigned the responsibility of collecting data from the quake-affected villages.

It was a long and tiring day but worthwhile, as at the end of the day, everyone seemed to be well acquainted and comfortable using the Akvo FLOW application. On the third day, we all headed to one of villages to assess the damage and WASH status. This also involved learning the real-time steps needed to initiate and conduct data collection in such a time of emergency. After completing all the survey forms following proper procedures of interaction with the local stakeholders and community, we were ready to start data collection.

The next day, all the enumerators were deployed to their respective VDCs for data collection and I, along with Mr. Paudel, headed towards another village of Gorkha. We spent the day there collecting photographs and stories, interacting with the community about their constraints following the devastation and also testing a new survey created in the dashboard to collect geographic shapes of the damaged households and temporary shelters. The following day, I returned to Kathmandu with lessons and memories of teamwork, dedication, technology, endurance, hope and optimism. Eight days after my return, 735 data points from VDCs, temporary shelters, public institutions, RWH systems and WS Scheme Systems were collected using Akvo FLOW, by 16 enumerators from 14 VDCs of Gorkha district.

Summarising my visit
NGOs in Nepal have been working here for decades and by now have become an associated part of rural life. People know them by the work they do and the toil they put into changing different aspects of village life. When I went to the villages with NEWAH, an NGO working for two decades in rural Nepal, I could see the faith they had developed in the heart of people where they worked. In the tough time when relief like tents and tarpaulins, food and medicinal items were the most anticipated items, we had nothing to offer them but merely collecting information about their status, instead. Before visiting Gorkha, I had heard incidents from other places where people had expressed their anger to those who were in the community for similar assessments. It was obvious that their psychological stress had come out when despite being needy for immediate relief, they were being asked with questions that would only made them relive those traumatic moments they had experienced.

But with NEWAH, it was so positive and full of support from the community. Although we too faced requests of some immediate shelters to those who still were not provided with, the community warmly welcomed the objective of our assessment. I also witnessed that many physical structures of water-sanitation facilities had survived the quake and most of the community were still practicing hygiene behavior they had been taught. This reflected the sheer hard work and sincerity that NEWAH has put into their projects. The true evaluation of their work could easily be seen in the success of this assessment.

Dashboard Analysis for “Access to Toilet Facility in Temporary Shelter/Camps”

As the final analysis of this assessment is yet to come, the preliminary picture shows that there is an immediate need of restoration of water sources in some parts of the intervention, ensuring access to safe water and sanitation and support in rebuilding temporary houses. The soon approaching monsoon can be a serious hindrance to maintain safe shelter and hygienic living conditions; hence it should be wisely considered while planning support to normalise the life of people living in Gorkha.

Word of thanks
This blog will remain incomplete if I fail to express my deepest gratitude to those sixteen enumerators who showed true sincerity and dedication to their work. Among them, families of four enumerators were direct victims of the earthquake and lost their homes, cattle and one even lost her cousin in this destruction. While collecting data from the villages, they all had to spend their nights in tents out in open spaces or nearby forests. The regular aftershocks that occurred during the data collection were always threat to them. But all these didn’t hinder their sense of responsibility and they came out as true heroes. I also thank Nepal WASH Alliance, NEWAH, Dutch WASH Alliance and my colleagues at Akvo who showed immense support and coordination in this task with such an ease that working in the field was not at all a problem.

My humble thanks to our friends at SEIU who at such short notice managed to transfer the possession of mobile devices that was one of the key reasonsfor successful data collection. Finally, the people of all fourteen villages, who despite in their time of severe pain and loss supported the enumerators with real information and facts during data collection, need to be thanked.

We Shall Rise Again.

Jigmy Lama is programme officer at Akvo, based in Kathmandu. You can follow him on Twitter @jigmylama