We’re about to conclude our design work on a new round of training materials for Akvo Really Simple Reporting, so I wanted to explain how we got here.

Akvo launched itself at Stockholm World Water Week in August 2007, so as a brand we’re almost five years old (we incorporated later, in 2008). For a long time our communications fell into two categories:

1. Brand
We reached out as a team to attract and inspire real people actually working on development projects. We’ve used poster and postcard designs to set the tone, from long before we had a tangible product and real customers. Since then too, our blog has been an important way to help people feel part of the journey (see my piece here on why I think blogs are important). Twitter’s been useful, too – most people at Akvo have their own Twitter accounts or for the full experience follow the Akvo Staff Twitter List. We’ve also used side projects to emphasise we are digitally-savvy and use tech to bring things to life. WaterCube is a nice example of this in action, where Akvo T-shirted staff helped interview and bring online short video pieces with more than 450 people working in development and poverty reduction. 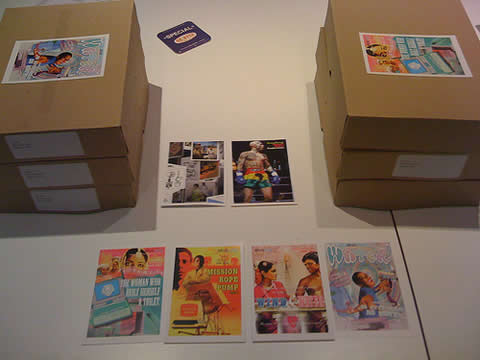 2. Partnerships
We have maintained a design identity and set of product and corporate pages on our website, in proposals we write, in “one pager” sales sheets, presentations and mockups and in annual reports. This has followed our corporate identity developed by Gino Lee and Anke van Lenteren – clean visuals, plenty of white space and a candy stripe graphic element. Mark Westra also led the creation of our first Akvo RSR user manual, downloadable in 3 languages as a pdf. 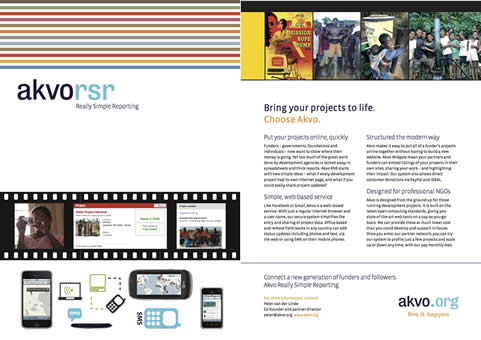 Time for something more
It was late last year that I realised we needed to do more. We had succeeded in explaining RSR to a substantial number of senior people running development programmes, and had contracts in place to implement Akvo RSR in their project networks. While that was great, in reality we’d suddenly become responsible for selling Akvo RSR onwards in these programme networks – to explain the what, why and how – to people working at a local and regional level around the world. Just to make this harder, these people were often in very remote places with limited internet connectivity. We faced what is known in the IT industry as the challenge of “user pull-through”. You’ve got the deal, but now the hard work really begins – getting people to use your stuff.

What we needed was to develop a more focused identity for Akvo RSR user materials – including training presentations, user guides and digital animations. People have been asking us to make animations for a few years, but they’re a tricky business – very expensive and hard to get right. Our first full attempt at an animated movie in my view failed – it was too consumer focused, presented users as childlike cartoon characters, presented the world from afar (rather than from the ground) and it simply didn’t have the gravitas, confidence and connection of our first big hit – Vincent’s movie posters. We’d need to think it through better next time.

The “Show and Tell” stopgap
In early summer 2011 we put together the idea of describing Akvo RSR features as a set of bubbles – including “Show”, “Map”, “Tell”, “Broadcast”. We used this concept at Stockholm World Water Week 2011 on our gigantic video screen, accompanied by postcards, and in a more evolved form at World Water Forum in Marseille in March 2012, and it went down well with the buyer-audience. It has since featured on our home page. But I didn’t feel it was meaningful or engaging enough for the larger base of RSR users that were picking up the system for the first time. 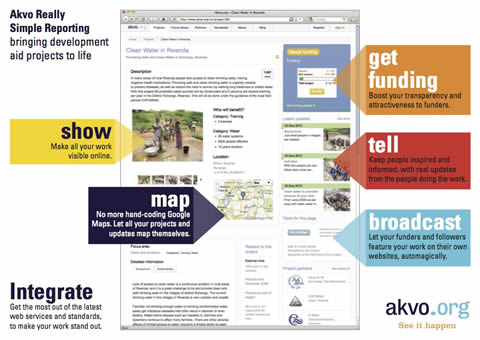 Fortunately we could make the case to invest design time here. Our new consortium programmes such as Connect4Change and Dutch WASH Alliance include budget to develop user training and if we did it well we could reduce the number of expensive journeys to remote locations to train users, valuable as these are. I felt it was important that this training should have an identity that the partners could feel was as much their own as it was Akvo’s. I wanted the team at Connect4Change, say, to feel proud of using Akvo RSR themselves, that it was their tool, their system. These materials would be their presentation materials, and not require an Akvo person to always be there.

Starting with animations
Jo Pratt and I started looking at the problem last autumn. We’d already begun to do monthly Akvo RSR user newsletters – that focused on how people were using the system. Peter encouraged us to look at the design and animation team at Subsoda in the Netherlands. Initially things were hard – it was difficult to define what we wanted and communicate the subtleties of the brief. But we persevered and had two crucial days with Hanne Ghiksen and Jessy Rietdijk after we decided to bite the bullet and fly them to London. Here in Bermondsey we deconstructed what Akvo RSR was about and put it back together in a new form. I also refined a lot of my ideas when Kathelyne and I did our first big Akvo RSR field workshop in Bolivia in December. That also provided some handy visual material to get us started.

We chose to develop Akvo RSR user materials as something distinct from other Akvo PR and communications. It should be bold and interesting, but not a sales pitch. It should grab people’s attention in a hot seminar room in Burkina Faso even when someone has pulled down all the blinds and turned the lights down because there’s a beamer on. The video animations should act as tools to structure and complement future field-oriented content that we and our partners can create cheaply using the simple video techniques we’ve developed. The animations should work with or without audio. I wanted them to reflect some of the values in Vincent’s movie posters but that mustn’t constrain the team – it needed to be more real, less of a fantasy.

Eventually we settled on 3 core elements – why post updates, how to make good photo updates, and how to do simple video updates. Each had a 30 second animated video bumper that could run in front of related simple video interviews. And we did an opening and closing animation too.

These were ready in February (watch them above or in this YouTube playlist) but take-up was slow – I don’t think the partner team really knew how to use them. So the next phase became crucial. After holding our first Akvo Track Day, in Amsterdam in March, we felt ready to start building a much more cohesive Akvo RSR training identity. An important step was hiring an in-house designer and illustrator who could help us with telling stories in a visual way. Linda Leunissen had the dual benefits of living near London but also being Dutch. So she could work with me and Jo here in the UK, but also talk in Dutch to our Amsterdam team when they really found it easier to describe their needs in their native language. 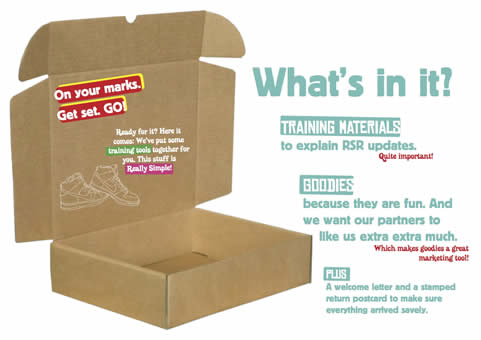 The Training Box
So this summer, we’ve been creating a kit – something physical that can be sent to trainers in remote places or brought along to workshops we’re doing around the world. I think this kit will also help partners that treat our software as something to try and get for free understand that they have much more to gain by paying for a higher level of support and engagement with us. It builds on the visual style of the video animations but goes further, and into more detail. Charlotte Soedjak has reviewed feedback on training to date and helped us refine the detail of the content and create a new Powerpoint deck too. See her blog on the evaluation of Akvo RSR workshops here.

While some may think that a physical kit is counter-intuitive for an internet project like ours, I’ve concluded it’s actually quite important. 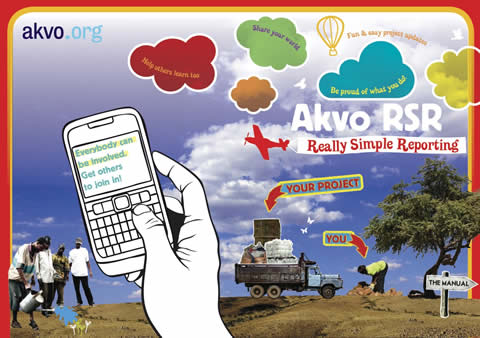 The core content is a fold-out poster, which is designed to accompany RSR training or function as a standalone beginners manual. It’s unashamedly designed to be printed, rather than sent digitally – it will fold out in a nifty way and we’re quite excited about it. If you’re interested, the final prototype (v2.5 – 4.3MB) is downloadable here as a pdf. While I prefer to avoid gearing everything around conferences, we’re on target to have the new manual and Training Box ready to show to people at Stockholm World Water Week.

5 years since our first appearance, it’ll be great to show people how simple Akvo Really Simple Reporting is to use.

Mark Charmer is a co-founder and the communications director at Akvo, based in London.