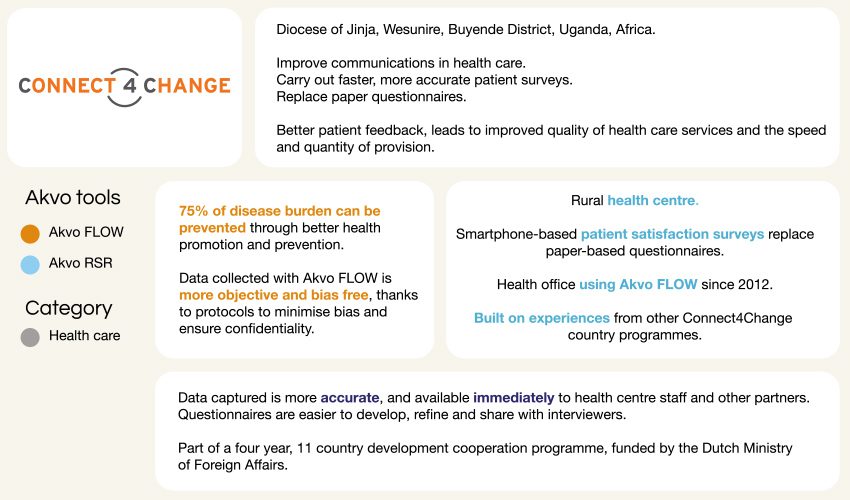 Connect4Change (C4C) is a consortium of Dutch development organisations (Cordaid, Edukans, ICCO, IICD and Akvo), that are working to apply technology to accelerate the development of people in Africa and Latin America. Investing almost €50 million over five years, its vision is of a world where people – particularly women and young people – are able to access relevant information that lets them shape their own future. Information technology is the main enabler in this process.

Akvo’s role in the Consortium is to assist everyone involved in gathering data and sharing knowledge, bringing project information online and simplifying reporting. The C4C consortium has a public reporting platform, developed and maintained by Akvo. Built using Akvo RSR, the platform acts as a linking & learning tool between partner organisations. It’s also a transparency and accountability tool, as it opens up each stage of the programme as it unfolds to everyone involved and the general public.

How can technology improve healthcare outcomes?
The Ugandan C4C programme is focused on education and healthcare. In Uganda, health systems are weak. Over 75% of the disease burden could be prevented through better health promotion and prevention. As technology has the potential to improve communications and enhance the spread of information across health systems, the C4C health programme in Uganda helps its partner organisations to integrate IT into their work. The aims are both to improve the quality and quantity of healthcare services the partners provide and to ensure people have the information they need to keep themselves healthy.

Using smartphones to capture patient feedback
One of the local partners in Uganda is the Health Office Diocese of Jinja, which is the coordination arm of the Diocese for all health activities. Its role is to recruit and supervise staff, manage and mobilise resources, and lobby and advocate for efficient and sufficient quality health care for all. In order to identify unmet needs and loopholes and improve the efficiency, agency and relevancy of health services at the point of delivery, the Health Office has been using Akvo FLOW since 2012 to conduct patient satisfaction surveys.

All health office staff, as well as other data professionals, are now well-trained in carrying out patient satisfaction surveys on a smartphone. All the healthcare facilities in the Diocese are now using Akvo FLOW to monitor and evaluate their patients’ satisfaction. People are randomly selected both at the exit point of health facilities and in the community and asked a series of questions about their perception of the quality of care delivered.

Even before 2012, patient satisfaction surveys were not a new thing in the Diocese, but before the introduction of smartphone technology they were done in a paper-based format which was found to be cumbersome, time-consuming and inaccurate. The Health Office therefore researched alternative approaches and carried out a comparative study looking at call centres, postal surveys and smartphones. The research revealed that surveys conducted by telephone and on paper often require a good deal of time and effort for data to be collected, computed and analysed. Akvo FLOW allows survey data to be collected relatively quickly and easily, and can store a large amount of information over a longer period of time compared to other methods. Data collected in this way is also more objective and bias-free, thanks to protocols to minimise bias and also ensure confidentiality. All this means that the patient feedback loop has got faster and more accurate, resulting in improvements to the quality of healthcare services as well as to the speed and quantity of provision. 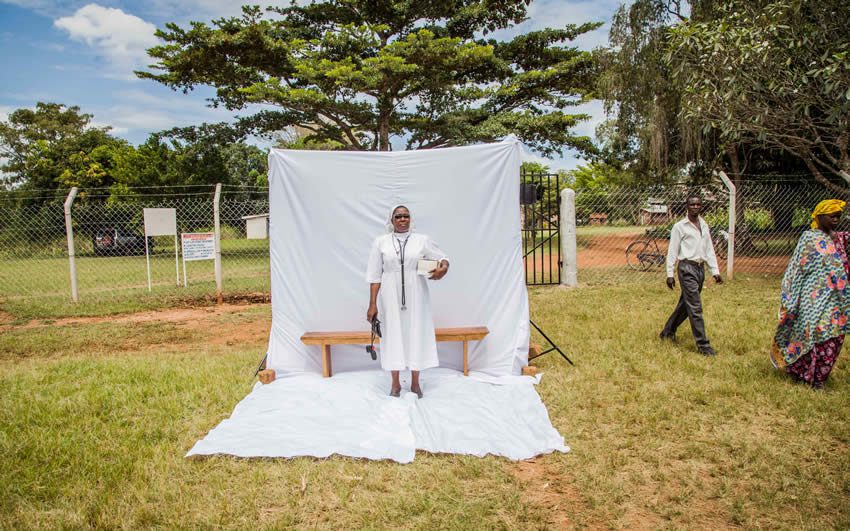 Same tool, same programme – many uses
When a tool is used by a network of organisations in one area, it becomes easier to roll it out to different partner organisations for different purposes because people can see the tool in action and the benefits it brings. Akvo FLOW is being used in other parts of the Connect4Change programme, for example in Zambia where the Ministry of Agriculture uses it to survey farmers to ascertain their information needs in order to increase their productivity and crop yields. Before the introduction of FLOW, the Ministry disseminated information via the media in one direction only with a fairly scatter-gun approach. By finding out precisely what farmers need to know and when, really useful information can be precisely targeted to individuals via SMS as well as communicated in a timely and targeted way via radio, TV and print media. Akvo FLOW is also being deployed within the education part of the C4C programme in Zambia to enable schools to capture and store mission critical data that previously was often lost or corrupted by computer viruses. Once people get a glimpse of how they can use smartphones to improve their working practices, they often become excited about the potential opportunities that open up. This enthusiasm is clearly apparent in the following video playlist of interviews with participants from an Akvo FLOW users’ workshop.

Jo Pratt is Communications manager at Akvo, based in the UK.
Want to discuss how Akvo tools and support can help your teams use data to improve services and decision making? Get in touch via our hub teams around the world, or email partners@akvo.org.