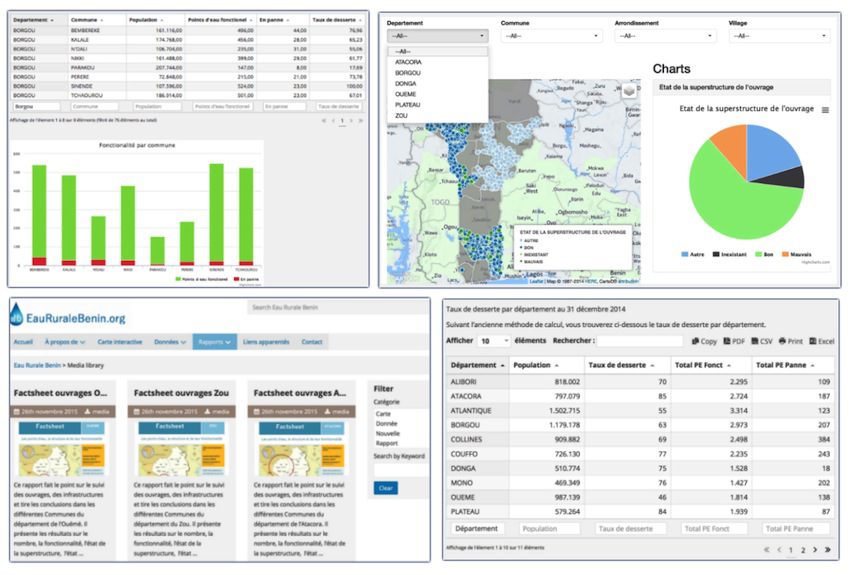 Above: Screenshots of the online water atlas EauRuraleBenin.org, which was developed in collaboration with the Ministry of Water in Benin.

Last month, Akvo fulfilled the contract with the Ministry of Water in Benin (formerly La Direction Générale de l’Eau). The ministry used Akvo FLOW to register public water points in the rural areas of six departments in Benin. In total, almost 20,000 data points have been collected by 70 enumerators since the first training in November 2014. Part of the contract was to create an online water atlas where the ministry would be able to publicly share the collected data on water facility functionality and coverage across Benin and thereby inform decision-making at local and national levels. Besides data, the water atlas would compile interactive maps covering all rural and small towns areas, in order to share the data in a more attractive and useful way. The result is EauRuraleBenin.org, which is now live and is the first online water atlas that Akvo has been involved in creating. 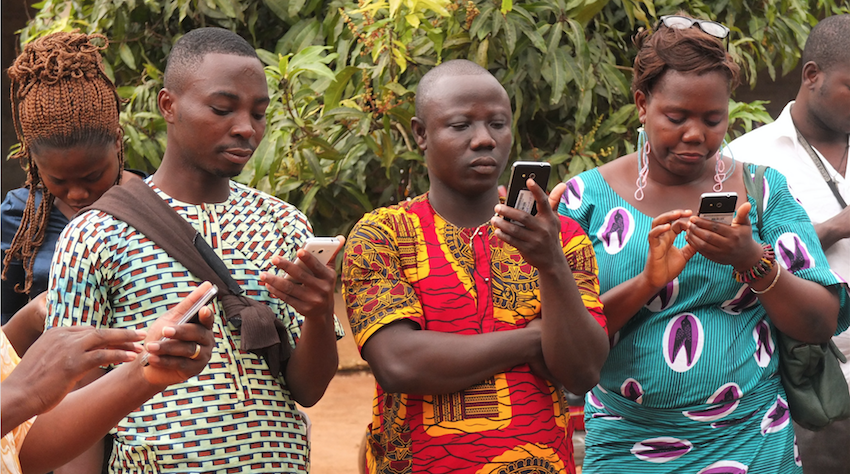 Above: Enumerators during the Akvo FLOW training in Benin, November 2014. Photo by Giel Hendriks.

To make the maintenance of the online water atlas sustainable, we created an Akvo Sites WordPress template with which the ministry itself is able to update the atlas. I had the pleasure of being involved in creating this online water atlas and visiting the ministry to train three employees for four and a half days on this subject. In preparation for the training and to have some data available already, Charles Kimani, a project officer in our East Africa hub, developed the interactive map based on CartoDB maps that were created by Frédéric Millogo, a project officer in our West Africa hub.

As I didn’t receive much input in advance, I didn’t know what to expect from the training. But the moment I showed the website and demonstrated the ease of the WordPress back-end, they were immediately interested. A range of new ideas and functionalities were proposed, and during the four days of training we worked hard to meet the needs of the ministry. They asked us to create a functionality with which people from the different departments could download directly a set of filtered data in excel, pdf, and/or print directly. Creating this feature means the database department can now refer to the water atlas when people come to them requesting specific data, which saves them a lot of time.

Above: Raouf Bouzounon of the Ministry of Water in Benin introduces the idea of the online water atlas in French. Video by Lars Heemskerk.

It was really nice to see how the ministry received the online water atlas and to hear how this benefits them and even helps in making strategic decisions. In 2016, Akvo will also be creating a online water atlas for a similar project in Mali. During the exchange visit, the people from the Ministry of Water in Benin presented the website as something of their own and they will take responsibility for the content because it is their data being displayed. From the Akvo point of view, this part of ownership is important and it is nice to see how data comes together in a online environment that is accessible to everyone. To see it in action, please visit: https://eaururalebenin.org/