Akvo has been awarded a 100k USD grant by the Bill & Melinda Gates Foundation. The award forms part of round 18 of the Foundation’s Global Grand Challenges funding programme aimed at designing new solutions to data integration for malaria elimination. We will work to create a user-focussed malaria data integration and visualisation system, based on our new Akvo Lumen platform.

Malaria is a disease caused by parasites that are transmitted to humans by the Anopheles mosquitos. In areas affected by malaria, children and pregnant women are especially vulnerable. In Africa, the disease kills one child in twenty before the age of five. Malaria is, however, preventable and curable using extremely cost-effective treatments and control measures. During the period 2000-2015, due to a ten-fold increase in funding for combatting malaria, its occurrence rate was reduced by 37%, and its mortality rate dropped by 60%: an enormous success [1]. This was accomplished by the wide-scale use of malaria control interventions, such as bed nets, indoor insecticide spraying, and treatment.

Above: estimated percentage of 2-10 year olds that are infected with malaria (Plasmodium falciparum parasite) at any one time, averaged over 2010. The scale runs from 0% (blue) to 70% (red). Source: Malaria Atlas Project [2].

Despite this success, malaria is still a large public health problem occurring in 91 countries, inhabited by some 3.3 billion people — half the world’s population. The more deadly form of malaria, Plasmodium Falciparum, is estimated to cause 214 million cases and approximately 438,000 deaths per year, 70% of which are children under five in Africa [2]. Therefore, the international health community has as its goal to completely eradicate malaria.

In addition, the progress that has been made is fragile: drug resistance and competing uses for funds make further progress uncertain, and could even lead to an increase in cases. Successful malaria elimination will need an increase in resources and broad innovation in tools — new drugs, better bed nets, and better data collection and data use. 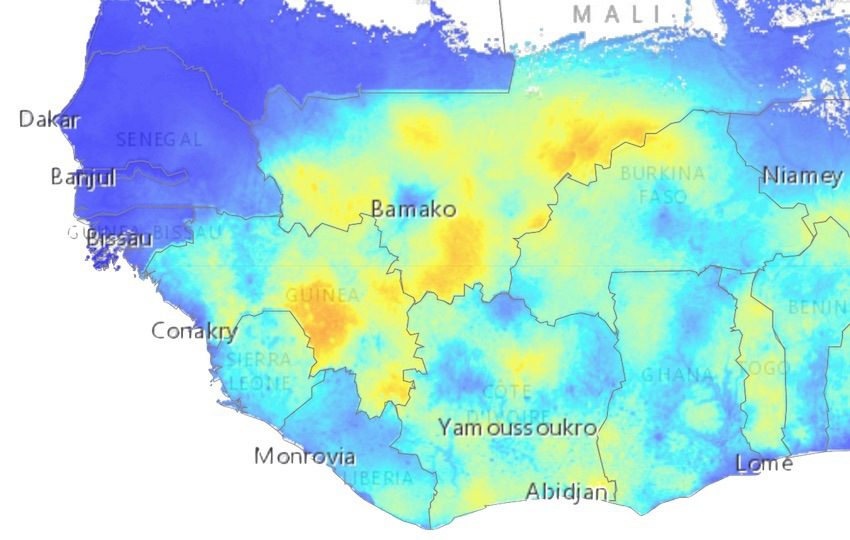 An important aspect of malaria is that in any given region, the risk can change from high to low within a relatively short distance, due to details in the land cover and microclimate, etc. Looking at maps of malaria incidence, such as the one shown above, there appear to be clear hotspots where the burden is particularly high. In most countries, only a very small percentage of the country has a high incidence. Therefore, it is important to both know where the risk areas for malaria are, and to map where people live exactly, so interventions can be focused in the right way.

How Akvo wants to contribute

To eradicate malaria, it is very important to have as much information as possible about where cases occur, so trends and outbreaks can be detected and acted on early, and interventions can be targeted to the high-risk areas first. To make this possible, a lot of different information sources need to come together. There is a great wealth of data already available online (e.g. Malaria Atlas, WorldPop, VectorBase, and many others), and, in addition, a lot of relevant satellite data such as temperature, elevation, and soil cover is available. A concentrated effort to unlock and make available additional national malaria-related datasets, such as routinely available case data, would lead to a very rich library of useful, curated and maintained data sets.

However, for this dataset to become useful, two conditions need to be fulfilled. First of all, the curated datasets need to be made available in a simple and intuitive user interface, without the need of programming or statistical skills. Secondly, the system needs to enable a multitude of users to make and evolve their own data products out of these datasets, which can be a combination of charts, dashboards, maps, etc. This is exactly the kind of challenge that our new product Akvo Lumen was built for.

We envision a system that combines integration of curated malaria-related data from many sources with a data transformation, visualisation and publishing system that allows a variety of users to create and share visualisations and dashboards that fit their specific needs. We believe this idea is novel because existing systems either focus on data collection, or on data analysis. We want to make it easy for users to have access to the variety of building blocks they need to analyse and create visualisations that help decision-making.

With this information, malaria elimination programmes can direct resources to the populations most in need, and respond in real-time to new developments such as fresh outbreaks, or interventions not working as expected. As a result, progress in malaria control can be accelerated and wastage of resources avoided.

One of the major innovations in Akvo Lumen is an intuitive user interface to perform data cleaning and transforms, which are captured and can be reapplied when new data comes in. Akvo Lumen supports a transaction log for the transformation steps, enabling total process transparency. This allows the building of integrated and automated data pipelines without needing complex skills. In this way, live data can be cleaned and transformed, and existing static data can be turned into automatically updating, flowing data sources. In this way, progress can be monitored as close to real-time as possible.

Malaria is not the only vector-borne disease. Other diseases, such as Dengue fever, Zika, and Chikungunya also form a significant public health burden. The geospatial decision support system we are aiming for will also be applicable for these and other diseases.

The Bill and Melinda Gates foundation has funded a total of ten projects under this topic this year. The full list is available here. We will actively look for ways to cooperate with these grantees in the coming time. Additionally, we will be looking for other ways to cooperate with leading organisations in this field. If after reading this you are interested in a possible cooperation, please send an email to m.t.westra (at) akvo.org.

Mark Tiele Westra is senior advisor at Akvo, based in Amsterdam. You can follow him on Twitter @mtwestra.