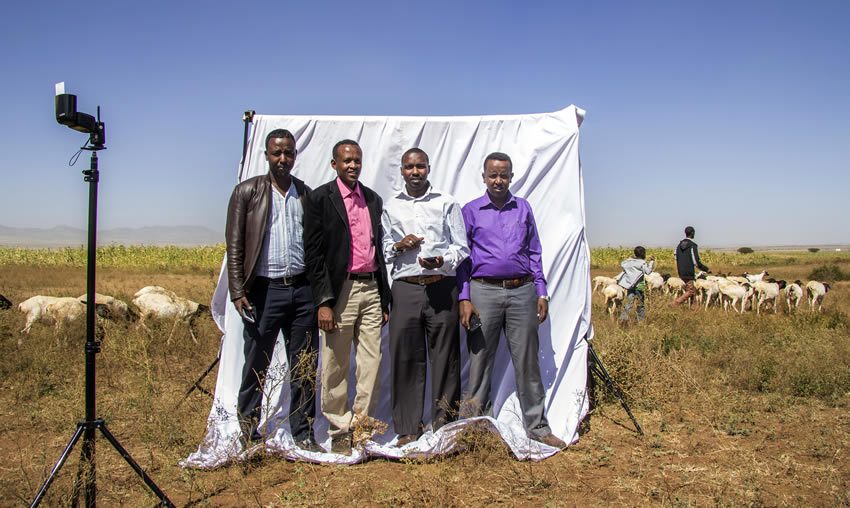 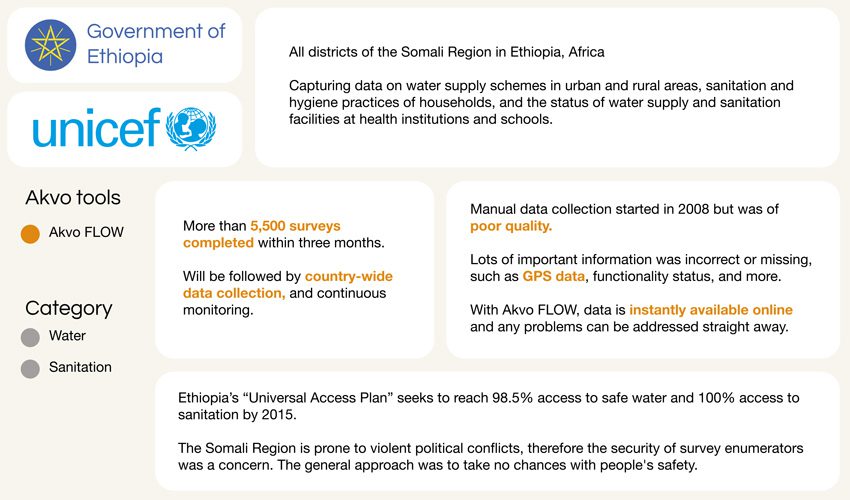 Improving access to water and sanitation through better data collection
Akvo is working with UNICEF and the Ethiopian government in all woredas (districts) of the Somali Region of the country to support the development of the national WASH inventory (NWI). The inventory provides data on water supply schemes in urban and rural areas, sanitation and hygiene practices of households, and the status of water supply and sanitation facilities at health institutions and schools.

Solving the problems of paper-based data collection
The Ethiopian government began work on the NWI in 2008. Over a four year period, data was collected across all parts of the country apart from the Somali Region.

Initially, data gathering for the NWI was paper-based, but this proved problematic. As well as leading to lengthy data entry and cleaning procedures, the data was of poor quality and lots of important information was incorrect or missing, such as GPS data, functionality status, number of households within 1.5km from water sources and type of latrine or water supply.

To overcome these challenges, UNICEF Ethiopia advised switching to smart phone technology and partnered with Akvo. During 2014, data was collected using Akvo FLOW across the whole Somali Region. This data is instantly available through an online, secure interface which allows any problems with data collection to be identified in real time and corrected straight away. Akvo has been providing technical support and direct oversight of data collection and transfer of data to the Government of Ethiopia’s management information system (MIS). The result is a robust, reliable data set for the region that can be used for policy planning and infrastructure management. 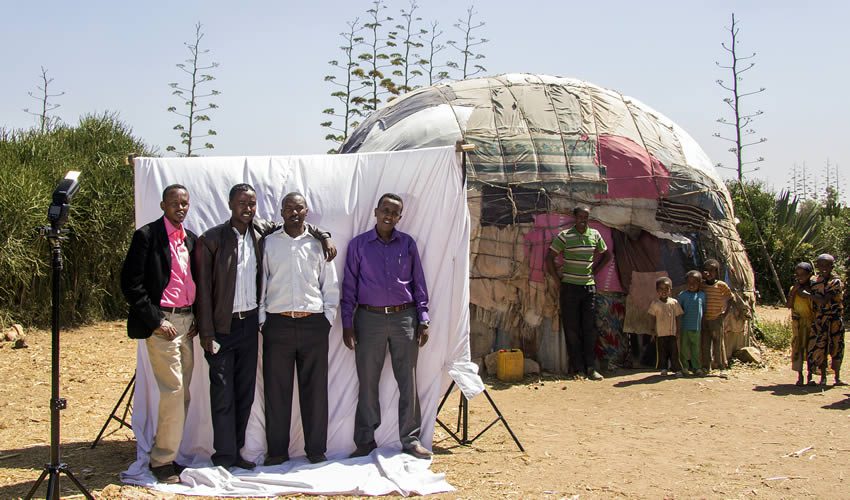 Collecting data at scale in ‘difficult’ places
The Somali Region is a vast desert area to the east of Ethiopia that is sparsely populated and prone to violent political conflicts. When planning the data collection operation, the security of survey enumerators was a concern. UNICEF reached out to all the NGOs working in the WASH sector in the region to ask for help. Everyone who could help did, providing transport, safe accommodation and car batteries or solar powered electricity points for phone-charging. The general approach was to take no chances with people’s safety. If progress was slow, so be it. At one point data collection stopped altogether for around three weeks until the situation was safe again.

The scale of the operation was impressive with a total of 5,696 surveys completed in three months (including the three-week hiatus). 220 Samsung smart phones were configured with the Akvo FLOW software. A field test run was carried out to see how long the phone batteries would last so that an itinerary could be drawn up around that.

Initially 45 government and UNICEF employees were trained on the use of Akvo FLOW at a master class designed to enable them to then train their colleagues. As well as a detailed explanation of the FLOW system, the master class covered: proper GPS calibration to increase the accuracy of the GPS coordinates; data collection in completely offline settings including manual uploading to computers and getting the data off the SD cards in the devices; and tips and tricks on how to conserve battery power as much as possible. 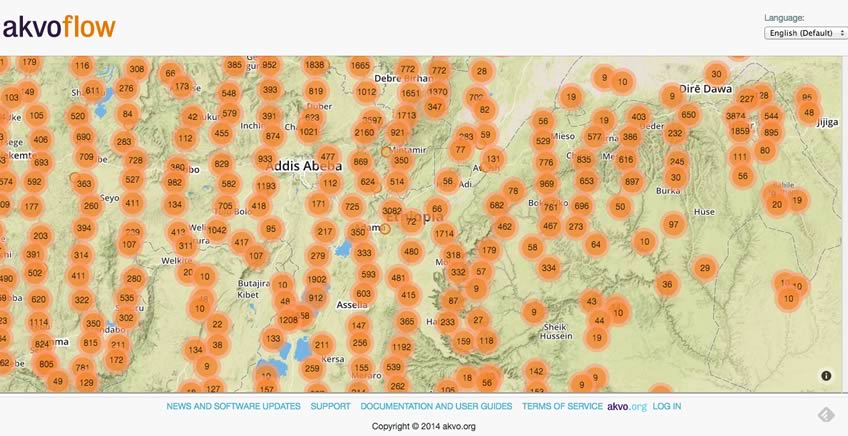 Above: all the data in the National WASH Inventory has been uploaded onto the Akvo FLOW platform. The data collected via earlier, paper-based methods are less accurate; incorrect GPS co-ordinates mean some data points appear in the wrong places on the online map. (If you click on the map image above you go to the live online map, where this is immediately apparent.) These errors will be corrected during 2015 through smart phone surveys.
Below: a master class for training of trainers took place in Jijiga, Ethiopia in November 2013, attended by 45 people. 220 Samsung smartphones were prepared for use with Akvo FLOW. Photo by Francis Warui of Akvo. 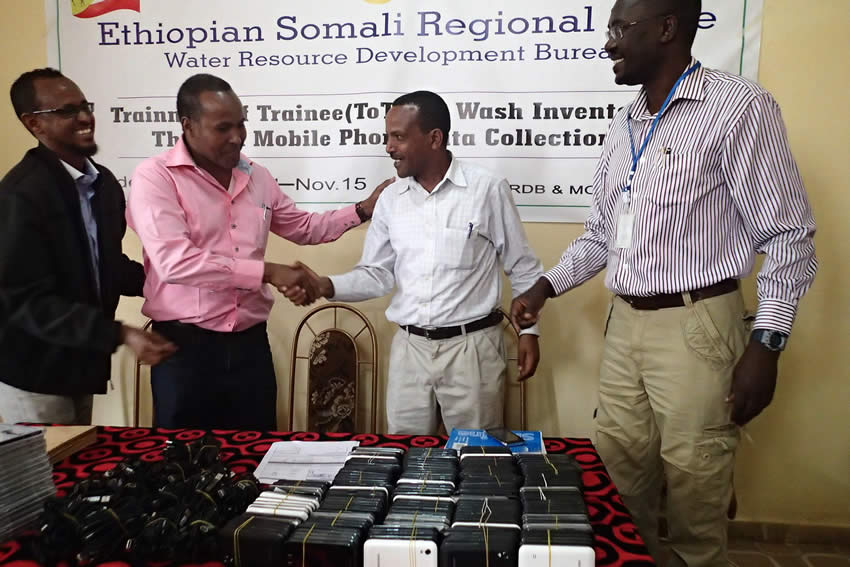 Making use of the data
Akvo has created a prototype for a customised, online, interactive dashboard to help analyse key performance indicators (KPIs) for things like rural water supplies and WASH facilities in schools and health centres. The dashboard is connected to a database that hosts all the available data. When a user loads the dashboard, they are presented with a visualisation of one of the datasets. KPI analysis is performed behind the scenes and the results of the analysis are displayed in the form of a chart alongside a map showing the point data.

This customised dashboard is to be rolled out nationally so that local and regional government bodies can access the information they need to plan their activities. 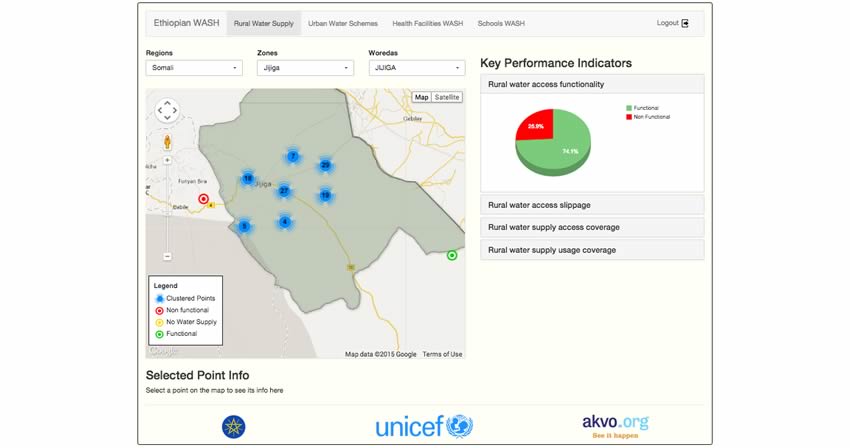 Continuous improvement
Akvo has now migrated the data that was previously collected in the national MIS to the Akvo FLOW platform. Although the data was cleaned as far as possible, it is evident that there are some gaps and overall the information is not reliable. Plans are therefore in place to survey all the rest of the country again during 2015 using Akvo FLOW, ensuring accuracy of data and GPS co-ordinates. This will result in a complete data set for the entire country and enable accurate and detailed mapping of the information. This process will likely take around a year. After that, regular surveys should take place to monitor status and evaluate progress in all areas. Eighteen months in, we are still really only at the beginning of our partnership in Ethiopia. There is lots of potential to support the government and UNICEF in monitoring and evaluating work in many different fields of activity.