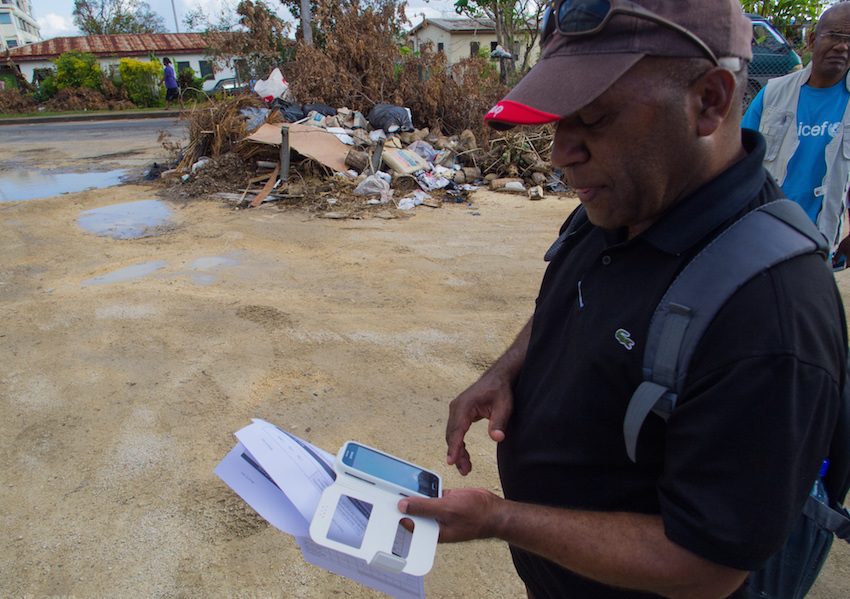 Spread across a third of the world’s surface, many Pacific island countries (PICs) and their remote and isolated populations face acute development challenges and coordination issues. Mobile phones have helped to ease the challenges of some nations that sprawl across many island groups and connect communities in the face of extreme geographies.

While PICs face projected increases in the severity and frequency of extreme weather events, governments and NGOs have only recently begun to incorporate mobile phones into disaster management plans. However, the rise of more sophisticated smartphone-based technology has opened up encouraging new avenues for policymakers working on disaster management.

Across the Pacific, existing mobile-enabled responses to natural disasters focus on community preparedness and information dissemination. Through bulk-SMS message updates, network providers and national disaster coordinators provide users with critical information before, during, and after such events. Ranging from emergency tsunami warnings to condensed weather forecast updates, before and even during cyclones, these services are pre-arranged by agreements between network providers and local governments.

But the limited capacity of mobile networks across the region has restricted the overall adoption of such mobile-based disaster responses. Across the Pacific, Samoa, Tonga, Papua New Guinea, Vanuatu – and more recently Tuvalu – are the only countries to have explicit network agreements to implement such messaging capacities, with Solomon Islands looking to integrate similar emergency services within their disaster communication strategies.

Cyclone Pam, which devastated Vanuatu in early 2015, saw the implementation of the country’s first SMS emergency warning system. The National Disaster Management Office delivered warning messages to more than 90,000 people, and an additional 160,000 public awareness SMS messages were sent before the cyclone struck.

These SMS alerts consisted of condensed reports from the national meteorology service throughout the cyclone. The early warning texts were credited with ‘saving lives’ in Shefa and the outer islands and heralded as a success by the Vanuatu Government. The SMS mobile warning system provided crucial forewarning when technical problems at the national broadcaster meant that emergency radio bulletins were not received on all the islands.

While the passive forms of bulk-SMS messages are useful for the majority of users with basic mobile handsets, current disaster management plans are yet to take full advantage of growing smartphone access. With timely information a critical resource in enabling rapid assessment of post-disaster damages, a growing range of smartphone apps and data platforms are assisting in improving post-disaster bottlenecks.

Current implementation of smartphone-based responses in the post-disaster and recovery stages are limited in the Pacific. Building on UNICEF’s Education in Emergencies training, Cyclone Winston provided the impetus for the first testing of smartphone-centred data captured by the Fiji Ministry of Education. Newly trained officials equipped with Akvo Flow – an open source mobile-centred software for data collection and evaluation – were able to produce a rapid and accurately mapped assessment of school-related cyclone damage.

Similar mobile-orientated data collection was also undertaken by the United Nations Disaster Assessment and Coordination team, in collaboration with staff from the Office for the Coordination of Humanitarian Affairs for the Pacific Region. They employed KoBo Toolbox – an open source smartphone based data collection tool – to produce rapid assessments of around 130 urban and rural sites affected by the cyclone.

Such platforms provided quick and efficient methods for data capture and sharing needed to coordinate post-disaster needs assessments. These platforms provide additional data triangulation through the use of photos, videos, and GPS embedded locations. Such evaluative smartphone-based platforms for assessing damages from natural disasters show promise in speeding up recovery planning – as in the case of Fiji – but their current application and incorporation into PICs preparedness plans remains limited. However, there is increasing recognition of the benefits smartphones can offer: further incorporation of smartphone-based data collection in post-disaster needs assessment planning was raised in a recent report [pdf] published by the Fiji Government. 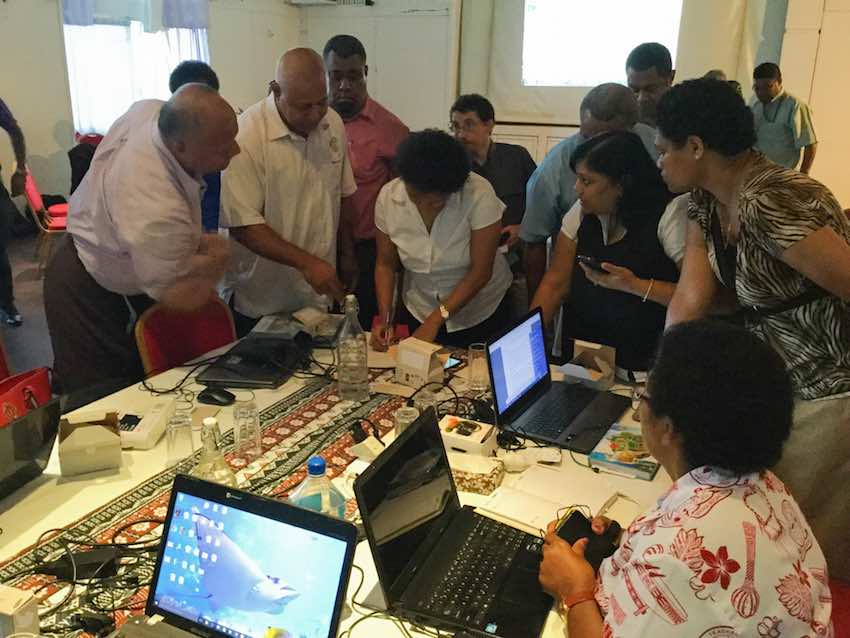 Across the region basic mobile phone handset ownership and access is on the rise. But despite overall positive trends, mobile connection varies greatly between countries. While Samoa boasts mobile connection penetration [pdf] of 124%, other countries such as the Federated States of Micronesia sit at around 20%.

Mobile and smartphone orientated platforms for disaster management provide a growing opportunity to overcome some of the geographical and communication response challenges faced by Pacific nations. Mobile bulk-SMS messaging has proved effective in capturing the disaster needs of wider population groups in the Pacific through broadcasting information. However, more needs to be done to incorporate the potential of post-disaster responses enabled by smartphone-based platforms.

While there is some understandable scepticism about the ability of smartphones to work effectively in post-disaster environments, software such as Akvo and KoBo Toolbox have incorporated offline capabilities to deal with limited (and in some cases unavailable) mobile network and internet connections. Such offline and low-bandwidth capabilities are essential for any such mobile software implementation in the region. Whereas Fiji boasts 4G connections, the Marshall Islands, Niue, Palau and Tuvalu only have 2G connections, with limited prospect for bandwidth increases in the next decade.

Indeed, new systems are coming into place in the region to deal with issues such as network outages and to improve mobile network capabilities post-disaster. In Australia ‘satellite cells on wheels’ [pdf] were implemented in the absence of electricity connection after Cyclone Yasi hit Palm Island in 2011. These portable networks are compact and lightweight with the ability to be transported via 4WD, light aircraft and helicopter and can be set up within 90 minutes.

While not a panacea for disaster response, mobile technology increases the number of type of tools available to governments and policy makers, and complements existing communications networks during times of natural disasters. However, there is still a long way to go, and Pacific locations are in need of further critical analysis. Important discussions on how to integrate new digital responses into disaster management plans for PICs are yet to fully emerge. Such systems require extensive prior training and capacity building for communities to enable rapid and rigorous results during emergency situations.

But, with the increase in mobile ownership projected to continue, adapting to this new communication ecosystem is likely to offer significant benefits for the region.

Mitiana Arbon is a Pacific Studies student at The Australian National University, and is currently undertaking an internship with Akvo.