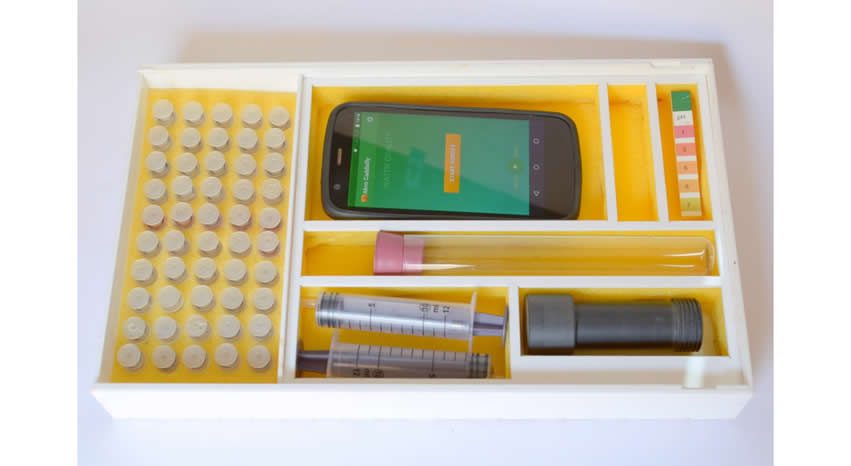 Check out all the latest blogs about Caddisfly on akvo.org, or take a look at this Caddisfly Tumblr from Ternup Labs.

We’ve been asking ourselves a number of questions about our future product mix. One is how do we expand our research and development capabilities on the ground, in the countries where our tools are used? A second is whether Akvo should expand into hardware (physical products), as opposed to being purely about software. A third is which kind of products can build on our existing strengths, our market presence and capabilities. This includes having a sharp eye on what kind of product concepts could be financed and developed with the backing of our existing investors and partners.

A key area we have identified is water testing, at the local field level. Globally, 780 million+ people still don’t have access to clean water. For example, in India (and elsewhere) fluorosis is a serious health issue and more than 100 million Indians are at risk because they drink water containing fluoride or other contaminants such as arsenic or coliform bacteria. Existing water quality-testing procedures fall short in a number of ways. Field-test equipment is often hard to use and unreliable and lab tests are costly and slow. Resulting data is generally stored locally and not shared effectively. This makes it hard to quickly collect, analyse, present and efficiently use data to resolve drinking water issues.

We think we’ve got a promising new product, that really takes things forward. And this week we started demonstrating it to anyone who wants to see it, at the 7th World Water Forum, in Korea.

It’s called Akvo Caddisfly, and is designed to be a simple, fast, portable and low cost drinking water testing kit that can be used anywhere to quickly analyse the level of fluoride in drinking water, using a smartphone. Currently under development, it also allows water quality data to be accurately mapped and shared online. Both its hardware and software are open source. Initial versions use standard colorimetric tests, harnessing the smartphone’s camera, flash and other capabilities.

An Indian tech startup with a difference 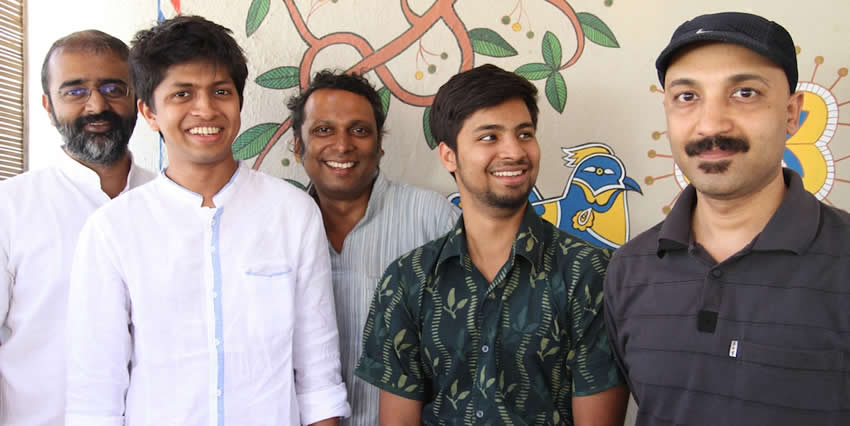 Most of the research and development of Caddisfly has happened in Bangalore, India, led by the Ternup Labs team. Our India team first met this small and very talented group for the first time several years ago, and after a lot of investigation by Thomas Bjelkeman in particular, Akvo formalised a partnership in January 2014.

While Bangalore might be renowned as the leading information technology city in India, and thus one of the most important in the world, a tiny percentage of those technology people are focused on tackling issues related to water and sanitation. But this team is unique because it is focused that way, puts sharp attention on good industrial design, and it’s also well connected to key Indian organisations working to assess and act on the problem of water testing. In particular, Ternup works closely with FKAN, the Fluoride Knowledge and Action Network, an Indian group of organisations committed to tackling fluorosis in water supplies.

When you have a nicely balanced R&D team creating a product, it’s important to have a light but confident touch as both an investor and partner. Over the past year, Akvo’s goal has been to create an enabling environment for the product team to thrive, so they can focus on systematically iterating through the design of a low-cost water testing kit that anybody can operate – a kit that works with a mobile phone, now generally the most powerful computer people carry, that’s reasonably accurate. Meanwhile Akvo has been refining the business case and plan, and presenting the technology and opportunity to Akvo investors and partners around the world.

Over the months to come, Akvo Caddisfly will be available to initial partners, and we’ll be describing Caddisfly’s development as part of an evolving Akvo R&D stream on the akvo.org website.

For example, Caddisfly is quickly developing itself from only a Fluoride-only test for drinking water, to a system for testing drinking water on multiple parameters using smart phones.

Software and hardware development of Caddisfly is led by Samuel Rajkumar, at Ternup in Bangalore. The development of the business case and partner network, from funding to field level, is being managed by Hans Merton, based in Amsterdam.

Akvo is developing Caddisfly with investment support from ICCO, SNV and Aqua for All, and working with the Unesco IHE laboratory in Delft, Netherlands, to validate the design of the Fluoride test and other tests. Initially it is planned to be available to Akvo partners as Caddisfly testing kits that will work in combination with Akvo FLOW. The second market will be other organisations who want Caddisfly as a standalone kit. We’re aiming to make the Caddisfly app available in the Google Playstore later this year, with partners buying the testing kits in parallel.

Our first pilots are underway or starting soon in India, Kenya and Burkina Faso.

For a PDF download about Akvo Caddisfly, targeted at initial investors and partners, click here. And to dive more deeply into a documented history of Caddisfly to date you can look over the TernUp Labs Caddisfly website here.

Mark Charmer is a co-founder of Akvo, and director of communications. Top photo is the current Akvo Caddisfly testing kit prototype.