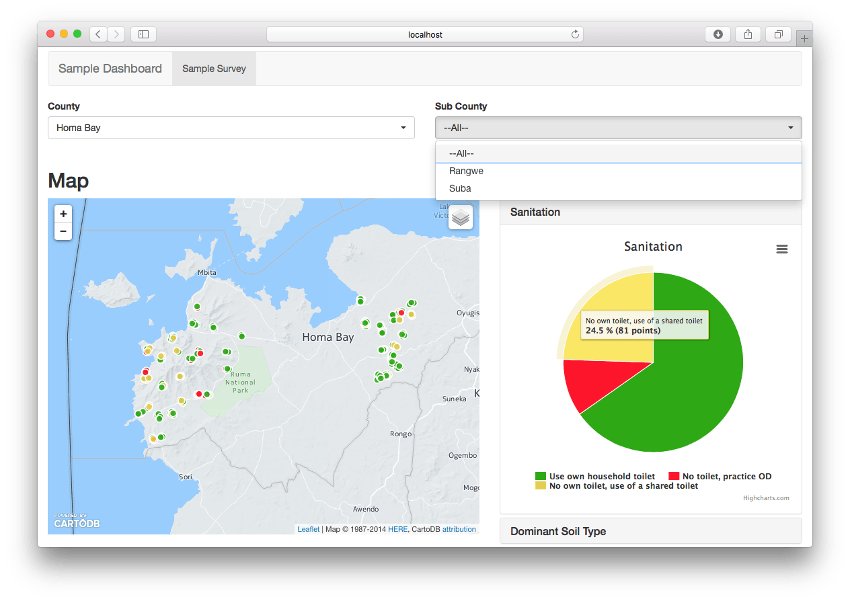 Above: screen grab of a sample interactive map.

Think of geographic data and chances are maps will spring to mind. Cartography is the art and science of making maps. It has existed since as early as 2300 B.C, over which time countless maps have been made, each one being used to overlay some kind of geographic data.

You can source geographic data from numerous sources, including collecting it using a tool such as Akvo Flow. After collection, often you’re presented with the problem of how to present the data in a format that’s easy to understand and interact with. Tools and platforms exist that can help with this problem, but it can be hard to find a tool that will offer a detailed enough level of interaction for the end user.

This is the problem we faced, and hence the idea of building interactive maps for our partners who are conducting surveys with Akvo Flow was born.

Why do we need interactive maps?

A standard Akvo interactive map is based on data collected using Akvo Flow. Over the time that we have been helping our partners with building field surveys and data collection in general, we have been able to observe that most of the surveys used bear a lot of similarities. This is largely due to the fact that Flow is mainly used in the water, sanitation and hygiene (WASH) sector, so many of the surveys cover similar topics.

Picture a use case where a partner is looking to monitor the accessibility of clean water in a given region. Before starting the data collection, they would first need to identify the key performance indicators (KPIs) to be analysed to fit the programme’s goal. Some of these indicators would then be added as survey questions in Akvo Flow. Once the KPIs are identified, they would then proceed to break down the region into its different administrative organs to make it easier to identify the different water facilities. These would also be added as cascading survey questions in Akvo Flow. The data collection exercise would then commence.

After the data collection is complete then comes the time to make sense of the survey responses. At this point the partner would export the data from Flow and run the analysis themselves. This is where the interactive maps come into play.

How does an interactive map work?

The interactive maps are based on a custom built code template that allows a user to interact with the survey responses by allowing them to filter based on the administrative organs used in the survey, as well as plotting an analysis of selected KPIs on charts/graphs. All interaction and data analysis is based on the filters that the user applies. The dynamic nature of the interaction with all the available data is the reason for the unofficial labelling of these visualisations as “interactive maps”.

Above and below: maps can be filtered by administrative organs and key performance indicators (KPIs).

The responses are overlaid on two components of the visualisation; a map section based on the Leaflet JavaScript library, and a graphical analysis section for the chosen KPIs that’s generated with the help of the Highcharts JavaScript charting library. Both of these components are interactive. For the maps, you can click on individual data points (survey responses) to reveal more information about them. For the charts you can hover over different sections of the charts or graphs to reveal their composition or even download them.

At the moment interactive maps are deployable on request, based on the kind of data that a partner wants to visualise. They are currently hosted on a private server, but we aim to transfer them to an Akvo server so that they can be displayed publicly. When that happens we will update this blog to include a link to a live interactive map. 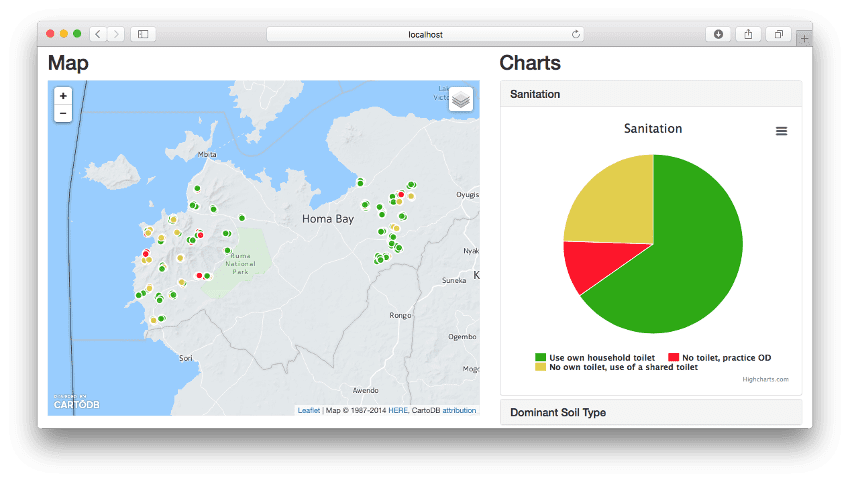 We are exploring the possibility of maintaining a live connection between Akvo Flow and these interactive maps to allow for real time data collection and visualisation. A prototype of this has already been implemented based on Flow’s new CartoDB integration feature but I’ll spare the details about that for another blog post.

The interactive maps will eventually be replaced by the eagerly anticipated Akvo Lumen which is still under development and is expected to include all the above highlighted features as well as many more. Count me as excited!

Charles Kimani is a project officer in Akvo’s East Africa hub. you can follow him on Twitter @kymni.