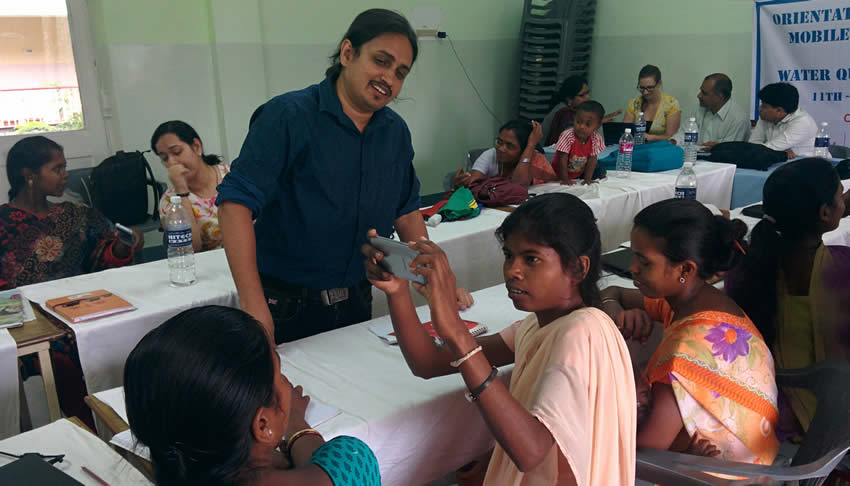 In 2012, Akvo Foundation started making its initial footprint in South Asia. The following year, with a small representative team in India, we initiated a partnership with FXB India Suraksha (FXBIS) focused on improving access to good quality water and sanitation services in the region. FXBIS is a non-profit organisation supporting marginalised children, families and communities in rural and urban India to reduce vulnerabilities in the context of poverty, health, education, and security. The strength and success of our partnership to date can be attributed to shared interests and enthusiasm to explore and shape new ideas.

Testing the waters in Jharkhand
In March 2013, Akvo trained FXBIS programme staff to use Akvo FLOW, a smartphone-based field survey tool for collecting and evaluating real time, verifiable data. FXBIS then started using FLOW in a water points mapping exercise within its project site in Jharkhand, a state in Eastern India. The project initially focused on understanding the status of the 100 critical drinking water points in one block (administrative division) of Ranchi district, Jharkhand. If successful, it was to be scaled up. It involved integrating water quality data tested for coliform contamination using an H2S strip test with data collected via Akvo FLOW on water availability, functionality, etc. The outcome of the exercise was GIS-based water quality maps, shared with the community, to be used for advocacy, behaviour change and and building map literacy.

Partnership deepens in phase 2
Based on the experiences of the first phase of the project, we adopted a more integrated approach in the second leg of the project to tackle the challenge in a comprehensive manner. The second phase focused on facilitating access to safe drinking water and sanitation and building local capacity in order to manage government water and sanitation infrastructure effectively in the selected project region. In 2015, we formed a strategic partnership with FXBIS that involved increasing the organisation’s capacity for data collection, mapping and visualisation. 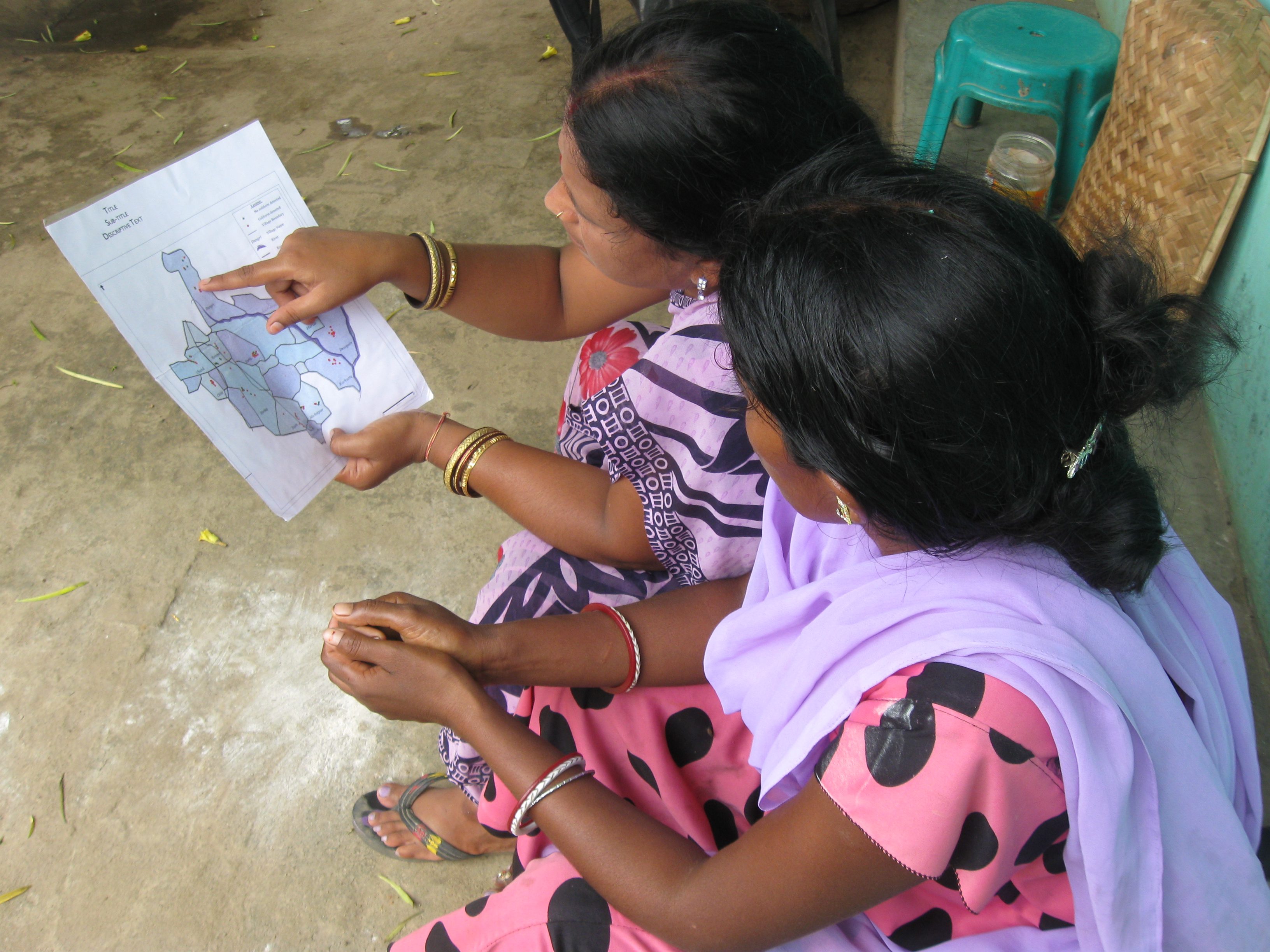 Above: maps as the new unifying language. Ranchi District, Jharkhand, 2013. Photo by FXB India staff
Top and below: the participants on the Akvo FLOW training course in Jharkhand, May 2015 were mostly ‘Jal Sahiyas’. Photos by Amitangshu Acharya.

Training rural women to use cutting edge technology
In May 2015 we held an eventful Akvo FLOW training session at the project site that included minor earthquakes and flooding. FXB’s enumerators (the people using Akvo FLOW to conduct surveys in the field) were a dynamic group of rural women who were eager to engage with the technology. Known as ‘Jal Sahiyas’, they are the frontline water, sanitation and hygiene (WASH) community representatives of the State government working in the remote villages of the district. They are responsible for building community awareness of safe WASH practices and conducting water quality tests. Most Jal Sahiyas who attended the training had limited or no prior experience of using smartphones. 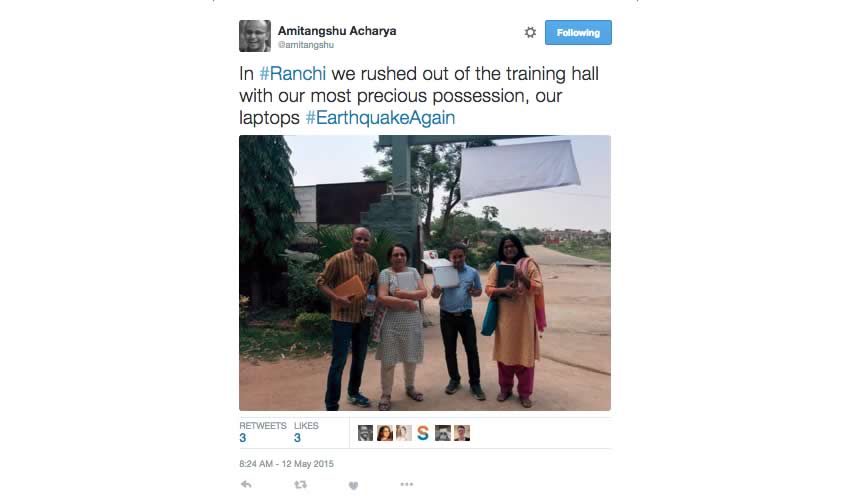 The transition from paper-based surveys to digital data collection involves a process of unlearning and re-learning practices around collecting and monitoring data. It should be made as simple and enjoyable as possible. Fortunately, on this occasion, we had an enthusiastic and receptive audience who understood the need and the methods to use these tools effectively in their project. Our experience with the Jal Sahiyas reiterated that rural women can adapt to a real time and efficient way of collecting data with good training and a user-friendly technology tool such as Akvo FLOW. 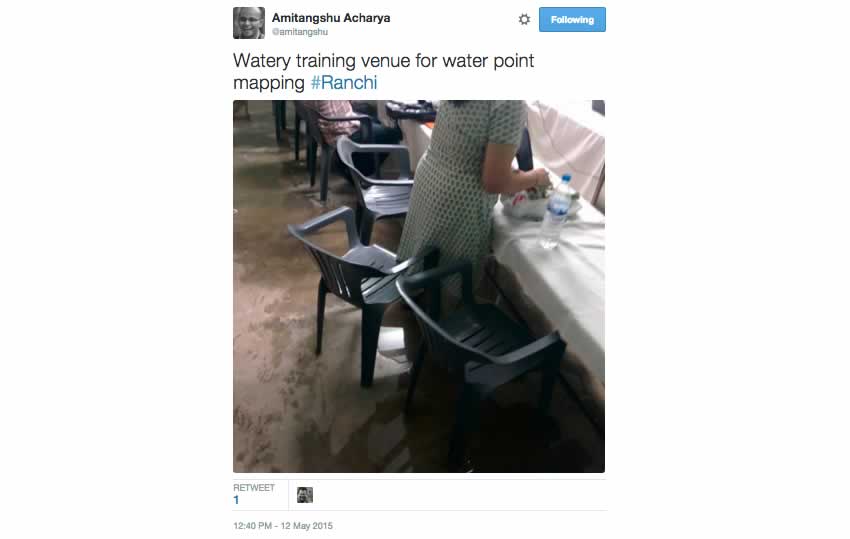 Tackling fluorosis using smartphones
In India, the success of a drinking water scheme is determined by the quantity of water supplied rather than its quality. This, coupled with poor and under-equipped water quality testing infrastructure and an inability to regularly monitor water quality, has left vast numbers of people vulnerable to consuming contaminated water.

At least 66 million people, out of whom six million are children, are at risk from fluorosis in India. Caused by the presence of excess fluoride in the groundwater, fluorosis has serious impacts on human health. It ranges from teeth becoming brittle to permanent limb deformities or immobility. Jharkhand is one of 19 fluoride-affected states.

Against this backdrop, we jointly developed a pilot exercise to use Akvo Caddisfly, a smartphone-based water quality testing tool, for assessing fluoride contamination in FXBIS’ project site. Akvo Caddisfly is an easy to use, fast, portable and low cost drinking water quality test kit. It allows water quality data to be collected, mapped and shared online using Akvo FLOW. The data and learning gathered during the exercise will serve as a base for building community awareness about fluoride contamination and fostering support in advocacy with the local government.

I have attended a few Caddisfly demos at conferences, workshops and meetings where Akvo staff are usually leading the session. But this pilot exercise was my first experience of watching the Jal Sahiyas conduct water quality tests using Akvo Caddisfly. I think the idea of something so significant and usually complex being developed with such simplicity was the highlight for me. Watching these community workers narrate their first impressions and thoughts about the tool was absolutely fascinating.

Subsequently we held a sharing session to demonstrate Akvo Caddisfly to government representatives from the Drinking Water and Sanitation Department, Jharkhand State Livelihood Promotion Society and NGOs such as Plan India, Welthungerhilfe and Tata Trusts. The videos below best capture this experience.

Reflections from the exercise
In the end, it was a good opportunity to reflect on the core principles that guide Akvo’s work and shape such partnerships. Over the last few years, we have supported development cooperation to become more transparent, accountable and collaborative. For many of our partners, openness is a path to empowerment. It has made development initiatives produce greater and more visible results. Verifiable and good quality data, as mentioned in one of the pilot testimonials, is a key component for informed decision making. This data and knowledge is most useful when it is accessible to organisations, and can be used to exchange and enrich co-learning and shared experiences.

In most cases, the process and results of data collection may give communities limited access and understanding of their own data. Together with FXBIS we created a more participatory approach that enables community data producers to be owners and mediators of their own data. The FXBIS programme has enabled local community representatives to collect good quality data to generate awareness and engage with local government about their WASH issues.