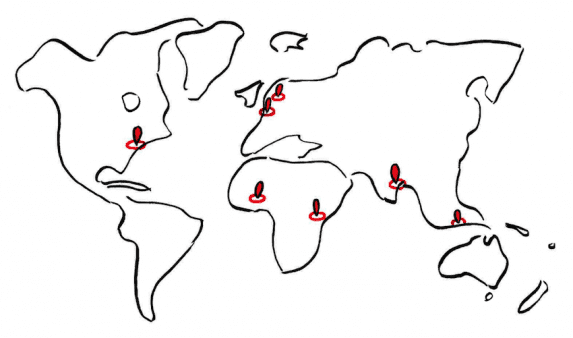 Above: The location of our writers. Picture by Marten Schoonman.

In February 2019, nine Akvo team members gathered from across the globe to host a writing week and to help build the foundations for the next chapter of Akvo. Meanwhile, Akvo’s new positioning was being launched in the meeting room below. Both endeavours centred around Akvo’s data journey methodology: we help our partners design their programmes so that they can capture and understand reliable data which they can act upon. As part of this methodology, we provide two overarching combinations of services and tools from our data platform.

With knowledge and experience spread across five continents, our challenge was to bundle that expertise into one manual that every Akvo trainer can use when facilitating workshops with partners. We set out to professionalise our services - from creating a Theory of Change to using insights for decision making - so that every Akvonaut can provide partners with consistent and quality support at every step of their data journey.

It was an intensive week of virtual and physical collaboration between the Americas on the one side and India on the other, with four other countries in Europe and Africa in between. Here, the writers share their experiences.

"With knowledge and experience spread across five continents, our challenge was to bundle that expertise into one manual that every Akvo trainer can use when facilitating workshops with partners."

Akvo provides services and tools. The two flow into each other and I enjoy working on the interplay between them. I was working on the system design workshop module, which is part of the design manual. I imagined a workshop setting with participants full of high expectations – system X needs to be interoperable with system Y so they can “talk to each other.” I remembered a similar case I’d worked on years ago, and recalled what went well and what didn’t. In particular, I remembered that experiential learning, or learning by doing, was much more effective than traditional teaching methods. Akvo’s approach is always hands on, participatory and interactive, so I slotted in even more questions and exercises into the module before passing it onto my colleagues for review.

Manuals, workshop guides, facilitator scripts, modules… whatever we call them, the important thing is that they are detailed enough for Akvo people to use when facilitating tailor-made workshops with partners. Looking at what this energetic group of people have written in three days, combining knowledge with tried and tested experience, it’s hard to exaggerate the value for Akvo. It details the specifics of how we support our partners in the different steps of their data journeys – from knowing what their programme wants to achieve, all the way to using insights from data to become more effective and contribute to inclusive and sustainable impact. No airy terminology, but concrete steps, all of them needed to go the full data journey.

We all worked together, each person bringing in their own expertise while making sure the modules connected. This, alongside Marten’s constant supply of sugar-packed goodies from Amsterdam, made for a very energised few days!

When I first joined Akvo in Amsterdam, I was amazed by how easily and often I would connect with my colleagues from all over the world. During this writing week, I rediscovered that initial excitement I felt in brainstorming with colleagues in different locations and time zones, picking each other’s brains on how to best take your partners on a learning journey.

Throughout the week, it became clear that there’s an incredible wealth of knowledge available on every phase of the data journey. Every hub held a piece of the puzzle, and by documenting, brainstorming, aligning, and fine-tuning these services in our writing week, we’ve created a complete picture of the workshops we can offer and make sure that we maintain quality and consistency globally. Reading what my colleagues wrote has really inspired me and I personally can’t wait to start using some of their modules, tips and tricks for workshops in East Africa.

Writing essays at university was never my favourite thing. Staring at a blank page is scary and inevitably leads to writer’s block. Thankfully, creating these workshop manuals was a different experience. Since there’s already a lot of knowledge in the group, we were able to co-create the content together.

Working in this dynamic way and building upon each other’s knowledge made me think – how could we take this further? Could we invite people from outside of our organisation to build upon our knowledge and make improvements to our manuals? In other words, why don’t we apply an open source ethos to our services as well. By inviting others to contribute, we can create open products of quality that help us to continuously learn. Publish the results in Github, let others re-use and improve, and create the best open crowd-written manuals out there.

“Une donnée utile est une donnée utilisée / useful data is data that is used.” It seems so obvious that we often forget to put it into practice. In my opinion, this is the strong point of Akvo and of Akvo’s data journey methodology. Uniting the forces of all the hubs with their expertise and knowledge of the local context has produced a result that is needs-driven and really focused on implementation.

Working on the Akvo workshop manual has been a great experience. Supporting partners in their data journey requires knowledge on what a workshop entails, how it can be given, and what kind of workshop we can offer in each data journey phase.

One of the added values and challenges of this writing week was figuring out how to integrate water quality into the data journey. Should water quality be a separate module in the design phase or should there be a separate water quality session as part of the monitoring framework module? Furthermore, it was good to make a distinction between components of the water quality data journey of the design phase and the capture phase. In general, it was also good to better understand what is actually done in many of the workshops. The step-by-step explanations, including crucial preparation, gives us the possibility to understand the content and value of each workshop, and of the data journey approach as a whole.

As a product manager, I haven’t really been involved with workshops by Akvo to partners or with this type of workshopping remotely with team members from various areas of Akvo. It was lovely to have the morning connection and come to an agreed understanding of the objectives before getting started every day. I also really liked the importance of ensuring we include exercises and discover/add those ourselves. We need to remember to work in more agile ways – so maybe the number of pages created over the period is not an important measure of success, but the quality of the work generated should be high.

I was on a partnership visit at the beginning of the writer’s week, so I arrived late. However, this gave me the opportunity to skim through the 100+ pages everyone else had written. We know so much; each of us. And exponentially as much as a team!

I was in charge of writing about how to facilitate sessions for data use, something known as situational or war rooms. It’s a borrowed term for the CIA/FBI briefings we generally see in movies where key stakeholders come together and brief the decision maker, generally the president or prime minister, about a certain issue. That’s very simplistic, but it gets the concept across. I’ve found them useful in facilitating the process of decision making, and they are key to the act phase of the data journey methodology.

When I’ve facilitated these sessions in the past, I’ve known who the participants are, how they approach decision making, the types of questions they ask, their attention span, and the amount of time they can, or are willing to, dedicate to diving into data insights. This knowledge leads to various types of session designs. This writing week exercise pushed me to think about what a generic session would look like, and how Akvo team members can use this guide as a starting point for their own facilitation sessions.

Many a time I have held training sessions in communities where the audience did not understand any of the languages I know, and nor did I follow their dialect. Working on the training module on data collection techniques during the writer’s week was a bit like these sessions, the only difference being that I could not even use sign language! So I had to bury my knowledge and experience of econometrics and develop a new “language” that would break down statistical concepts and terminology to the lowest denominator and amplify the instructions with real life, practical exercises. This was indeed a challenge but also a great personal learning, the bottom line being do not take ANYTHING for granted!

What I enjoyed most was working together as a group with a team of fantastic professionals who had so much to contribute to whatever I was writing. It is indeed reassuring to be able to bounce thoughts and ideas with such a diverse group of experienced colleagues.

Being pretty new to Akvo, reviewing the content created in the writer’s week was a great way for me to get acquainted with all the skills and knowledge that is available within the organisation. I believe that, once the manual is completely finalised, it will help to standardise workshops across all of the hubs. Akvo’s strength is in its diversity, but it’s also important to have a clear vision that each team member, wherever he or she may work or in whatever field, can adhere to easily. The interactive nature of the writer’s week was very valuable. I believe that through conversation we reach improvement, and I hope we can do similar sessions in the future.

By bringing the bulk of Akvo’s expertise to the table, we were able to create one manual per data journey phase, with a selection of modules that trainers can choose from and tailor according to their partner’s needs. These manuals will be taken up, used and improved by our hubs. As a learning organisation, we’ll continue improving our services, our training sessions, and our workshop manuals as we go. We won’t just do this within the organisation, either, but with partners all over the world. Guided by our mission, to support partners in their data journeys so that they can achieve sustainable and inclusive impact, we will build upon our experience and knowledge in a collaborative way.

Do you want to know more about our services?

Marten Schoonman works as a Services manager at Akvo, based in Amsterdam. You can follow him on Twitter @mato74