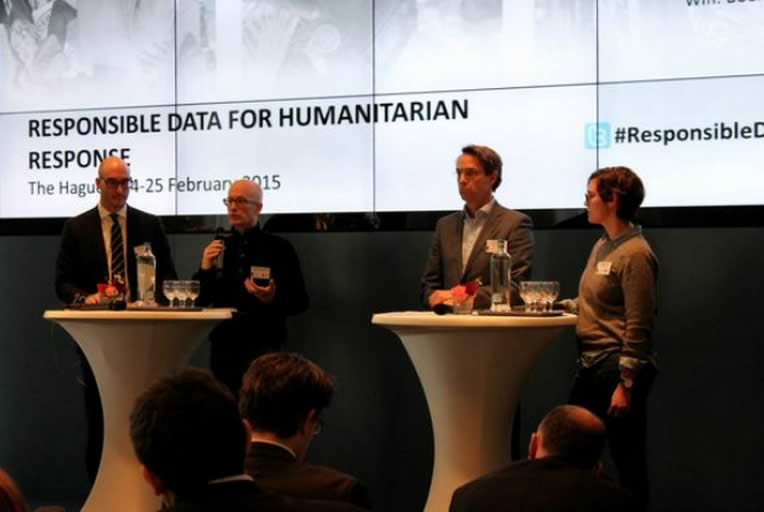 ‘Data is the present day equivalent of oil – but we haven’t figured out how to refine it yet.’

This was the general message of the Responsible Data for Humanitarian Response conference that I attended at the Ministry of Foreign Affairs in The Hague last week. The conference attempted to identify concrete steps towards working with data in the development sector to improve humanitarian response. Thinking about a future in which data will play an increasingly large role, several big questions came up.

What is useful data?
The promising buzzwords ‘big data’ and ‘open data’ have been circulating in the development sector for quite some time, but there is still a lot to be discovered about how data is best extracted and used for development. Until we know how to do this, there seems to be an urge to collect as much data as possible and then think of ways to make it useful in the long run. In the mean time we try to make sense of the data we already have.

One example that came up during the conference was that telecoms provider Orange, with the consent of the Ivory Coast government, released 2.5 billion call and text message records. A global contest was launched among universities and corporate scientists to think of ways to extract useful knowledge from this data set. In the end, one of the winners figured out how to optimise bus routes that would shorten commute times in Abidjan. However, there are big question marks about the validity of these findings when the reality on the ground is taken into account. For instance, buses only make up a minor share of the means of transport used by commuters in Abidjan. Also, the quality of the roads on the various travel routes wasn’t taken into account. In short, the ‘knowledge’ extracted from the data was almost useless for the Abidjans.

Above: the organisers of the Responsible Data for Humanitarian Response conference open the event by outlining what they see as the biggest data challenges. Left to right: Gideon Shimshon, Centre for Innovation, Leiden University; William Hoffman, World Economic Forum; Sam Muller, The Hague Institute for the Internationalisation of Law (HiiL); and Alix Dunn, The Engine Room. Photo by Annabelle Poelert.

How can IATI help?

‘What is useful data?’ is also a highly relevant question in light of the rise of the International Aid Transparency Initiative (IATI). As the IATI standard is fluid, new fields can be added whenever needed. But it is important to be clear about which fields are actually useful, or the list will just keep growing.

In a break-out session about IATI there was a heated discussion about which IATI fields were the most important and for whom. Three stakeholders were identified: governments, NGO’s and aid recipients. For governments, IATI is a tool to evaluate their aid programmes, to allocate their funds and to create transparency for taxpayers. For NGO’s it’s a tool to evaluate aid programmes, allocate resources and gain oversight of projects. Furthermore, in combination with Akvo RSR (Really Simple Reporting), IATI can easily become a communication tool. Finally, for aid-recipients, IATI is a tool to hold their (local) governments accountable for what happens to aid money.

Resistance occurs when the people that need to report in the IATI standard see this as an extra burden that only increases their workload, instead of a useful way to evaluate their activities. In the end, every level within an organisation can benefit from reporting according to IATI standards. But the key is to ask the right questions in order to extract useful data.

Data scientists vs ‘real people’
The main conclusion of the conference was that it is important to fully explore all the potential of data analysis as soon as possible. There was a feeling that we need to just get on with it, learning by doing and adjusting the process along the way. Most of the professional data scientists seemed to be quite dismissive about the dangers of ploughing ahead with new types of data analysis without fully understanding the consequences. Their biggest concerns weren’t necessarily ethical in nature. They seemed more afraid of failing to explore data analysis to its full potential and losing momentum. But what mistakes can be considered acceptable if the data affects people’s lives?

One guest at the conference confided to me that he wouldn’t even consider opening up the data his NGO had collected until there was a more strict regulation system in place about what can and can’t be done with it. For people who are at a great distance from the data source it’s perhaps easy to play down the effects of data ending up in the wrong hands. However, if you are the one who convinced community leaders to support data collection, you have a much harder time looking yourself in the mirror if things go wrong.

Responsible data
One of the dangers of the data hype is that we start extracting information like crazy from the data sets that are accessible to us and fail to ask ourselves critical questions like what do we actually want to learn from data? Which kinds of data are useful? What data is going to make a difference? And what kind of ethical framework should be put in place? In other words what is ‘responsible’ data? If we want to experiment with new types of data analysis, then let us at least make sure we first evaluate the associated risks.

Annabelle Poelert is studying for a Masters degree in International Relations at Utrecht University. She has just begun a six-month internship at Akvo, based in Amsterdam. You can follow her on Twitter @annabellepoel