During December 2014, ICCO invited us to give a training workshop to some of its local partners in Vietnam. Frodo and I travelled to Da Nang, the commercial and educational centre of Central Vietnam, where Le Hien, ICCO’s programme officer for Vietnam, arranged the training venue. The aim of the course was to introduce Akvo tools (Akvo RSR and Akvo FLOW) to the participants, and identify opportunities to help them introduce them into their own projects and work methods.

Beating Murphy’s law
Our trip got off to a shaky start when we arrived at Singapore airport to find our flight appeared to be cancelled. After asking around, we found it was only cancelled on the sign, and not in reality. We encountered our next challenge at the check-in counter, when I attempted to arrange the visa I should have already fixed before. Failing WiFi connections, cancelled payments, and delayed processing due to Vietnamese lunch breaks all took their toll. Finally, we got the proof printed, and we were just in time to take the flight.

Once we arrived in Vietnam, we found out it was relatively chilly and had been raining all day. We immediately regretted not checking the weather forecast beforehand, or bringing a jacket or socks. Fortunately, everything you need is for sale.

The training group size was almost 35, instead of 20 as expected. We crossed our fingers for good internet connectivity. We could not have been more happy when it turned out the internet was better than any place before, and everyone was tech savvy and eager to learn. 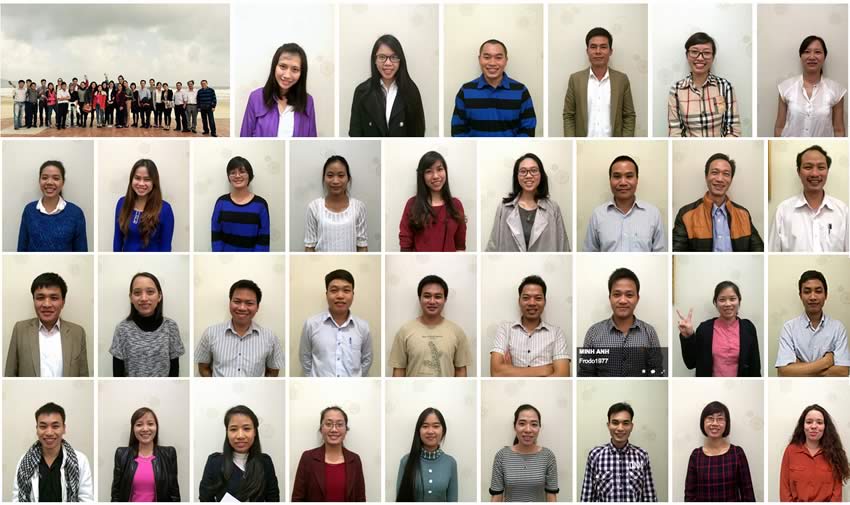 The programme
The participants came from many different professional backgrounds, ranging from indigenous pig-farming to coffee, forestry, tourism and honey. On the first day, we introduced Akvo RSR to the group and together we brought two projects online (project 2549 and project 2550).

The participants were then introduced to Akvo FLOW, and did their first survey at Da Nang beach. I believe it must be one of the most beautiful scenes ever for an Akvo training exercise. We were lucky to be there during one of rare sunny hours that week. The participants were unstoppable, and mapped 163 data points. Later on, we explained how to monitor data points over time.

On day two, participants were divided into four different groups. Each group set up an interesting questionnaire in the Akvo FLOW dashboard to practice with that day. This resulted in questionnaires about honey, tourism, coffee and micro-finance. After lunch, and a typically Vietnamese 20-30 minute power-nap, we went to the pretty town of Ha Noi to collect data.

On the last day, we focused on checking incoming data, creating reports and interactive maps, and improving tested surveys. All four groups presented the findings of their questionnaire. An interesting finding on coffee for example, was that most respondents do not like to add extra ingredients, such as chicken fat, to their coffee. It is however often offered to customers.

Top and above: Participants of  the ICCO training workshop on FLOW and RSR, 10 December 2014. Photos by Frodo van Oostveen.
Below: screen shot of data collected during a FLOW exercise in Hoi An. 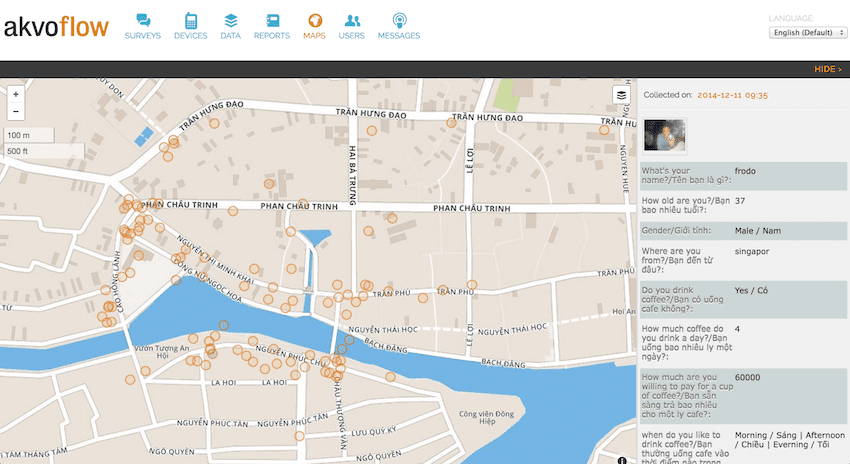 Next steps
It was exciting to see how everyone was eager to try new ways of working. The group dynamics were great, with people working together well and helping each other out if necessary. The demonstration of Akvo tools was successful, and people seemed keen to implement Akvo RSR and Akvo FLOW into their own projects. It is now up to ICCO and its partners to bring more projects online on Akvo RSR, and decide who is serious about using the ICCO dashboard in Akvo FLOW for data collection. Akvo and ICCO can ensure that local partners are supported in this process. The new Akvo FLOW feature of user permissions easily allows this way of working.

We received some interesting feedback from our training participants. One of the participants flattered us most by saying it was the first time he did not fall asleep during a training.

Here’s a Flickr set of images from our trip.

Anna-Marthe Sessink is project officer SE Asia at Akvo, based in Denpasar.