The eighth biggest country in Africa, Mali is large and landlocked. It also endures conflict, particularly in the poorer, more remote North. The country’s water infrastructure is in a weak state, with much potential for improvement. More than one third of the population had no access to safe drinking water in 2013. In conjunction with UNDP, an inventory was taken in the late 1980s of water points, implemented in a database called SIGMA (Système Informatique de Gestion des Ressources en Eau du Mali). This formed the basis of a master plan to develop ground water resources. An update to this inventory was conducted between 2001 and 2003, resulting in a decentralisation of the management of water resources to “DRHs” (Directions Régionales de l’Hydraulique).

In 2015, a coordinated initiative got underway to gather and share data about Mali’s water point infrastructure, with the backing of Mali’s national and regional governments. The project is coordinated by SNV, an international not-for-profit development organsation and Akvo partner, and involves national and regional government departments, regional and local non-government organisations, European development aid funds and a UN agency.

The roots of this process were a pilot conducted in 2014 by SNV, to use Akvo FLOW to collect data about drinking water points in 120 villages across four municipalities in the Koulikoro and Sikasso regions, with the financial support of UNICEF WCARO. The pilot generated over 500 data points. In December 2014, an Akvo team visited and presented a feasibility study on incident reporting. Mr Seydou Keita, the director of the Direction Nationale de l’Hydraulique (DNH), Mali’s national water ministry, was enthusiastic, and saw the opportunity to do the exercise at a national level, building on Akvo’s experiences with similar processes in Ghana, Liberia and Benin. Once the DNH became committed to carrying out the inventory, the process was relatively straightforward to make agreements with financial donors from organisations including UNICEF, the Embassy of Sweden, Germany’s KfW, and the European Union, to finance the programme.

The goal of the full programme is to develop a comprehensive map of water points in the country that informs the formulation of a new national water policy, known as the PROSEA. This requires an inventory of water infrastructure – to update the 2003 national study.

For the first time, the data for these maps has been captured digitally, through smart phone surveys, with all results published online for easier reporting and management access. Three Akvo tools have been central to this process – Akvo FLOW for data collection, Akvo RSR for project reporting and coordination, and Akvo Sites to make the data visible and accessible.

Akvo FLOW is a smart phone and web-based mobile survey tool, which enables teams of people – known as enumerators – to capture survey data directly into phones and share it to web-based dashboards. Akvo FLOW is designed specifically for the gathering of data on assets or services such as water points, in places which are geographically remote or where mobile and internet connectivity can be challenging. View the DNH Mali Akvo FLOW maps here.

Akvo Really Simple Reporting (RSR) is being used to provide updates on each DNH’s regional mapping project. The aim is to upscale the use of RSR to show how the national mapping is happening on the ground. See the projects online in Akvo RSR.

Akvo Sites is the online platform for the national water atlas. The intention is to make this data available to everyone, with a particular goal to involve more people in data collection, exploring ways to build feedback loops at a community level.

The programme will see a number of developments in 2016. Akvo is assisting in the building of this national water atlas. The intention is to make this data available to everyone, with a particular goal to devolve data, exploring ways to build feedback loops at a community level.

During 2016, the three remaining regions will be mapped with the help of 60 enumerators, in the more remote North – Gao, Tombouctou and Kidal. Around 60 enumerators will be involved, with some 200 people trained and engaged. 2016 will also see an extension of the overall programme to involve more than 700 municipalities across the 8 regions. The objective during this period is to institutionalise continuous monitoring processes, so data remains current moving forward.

In 2015, 120 enumerators worked on the programme, along with 13 dashboard managers at DNH and DRH levels. There were also 45 supervisors trained and working on the initiative. These people cover the five regions and the district of Bamako. It’s expected that at least 40,000 data points will have been captured by the end of the year.

A number of state and non-government partners are involved in creating Mali’s national water atlas:

Government: DNH – the Direction National de Hydraulique, is part of the MEE – Ministere de l’Energie et de l’Eau, the Mali ministry of energy and water. The DNH has eight regional branches, known as DRHs, including one for the district of Bamako, the capital city and most heavily populated part of Mali.

NGO: Organisations such as CEEA and CR ONG have “animators” that work at a very local level. The programme is coordinated nationally by SNV. 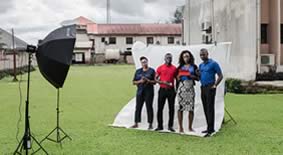