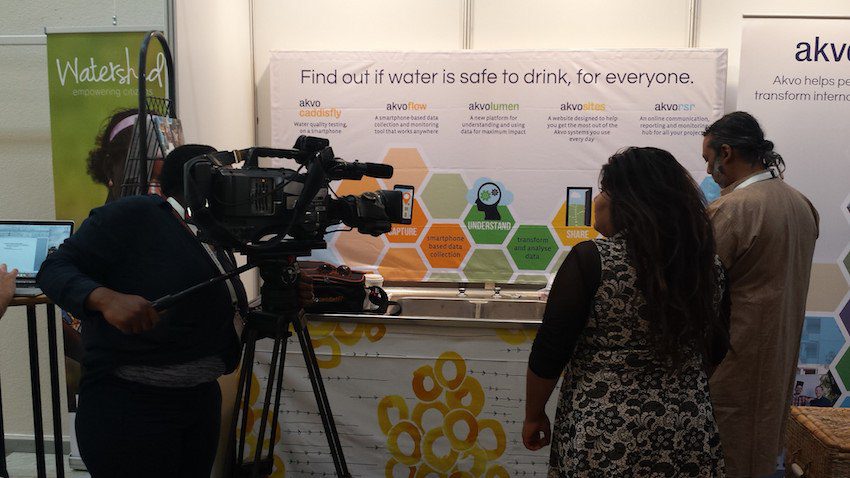 Stockholm World Water Week is the stuff of legend at Akvo. I’ve heard so much about it since I first joined the organisation six years ago, but this was my first direct experience of it. It’s where Akvo was conceived in 2006, and we’ve been back every year since, often creating a bit of a stir – sometimes deliberately so.

It’s the annual meeting point of many of the world’s water sector entities and experts; government bodies, NGOs, funders and investors, private utilities, corporations, consultants, scientists, engineers and observers. It’s received criticism, like many development related conferences, for lack of representation of those with the most direct understanding of water-related issues – the people whose lives are blighted by them. And it’s hard to refute that. But nonetheless there’s still a tremendous amount of information, knowledge and inspiration to be absorbed just by talking to people and attending sessions. With a substantial nod to the Watercube concept of previous years, I made a bunch of videos capturing conversations with people I met around the event, which you can watch in the play list below.
For Akvo, this year, was most definitely the Year of the Caddisfly Demo. Throughout the five days, our well-located stand was thronged with people grouping round our pop-up lab (a sink, some smartphones, some cups of water and the Akvo Caddisfly mobile water quality testing kit). Our somewhat audacious banner statement: “Find out if water is safe to drink, for everyone” achieved its objective of arousing people’s interest. Indeed, the prospect of obtaining water quality test results in minutes, compared to the current expensive norm of sending samples off to a lab and waiting two weeks – while hoping they don’t mix up the samples – is not a hard sell. Two weeks is a long time to wait for a drink of water.

Above: Samuel Rajkumar showing Dick van Ginhoven of The Dutch Ministry of Foreign Affairs how Akvo Caddisfly works in practice.
Below: the Akvo stand was busy throughout the week.
Photos by Jo Pratt. Take a look at Jo’s flickr set of pictures from Stockholm World Water Week. 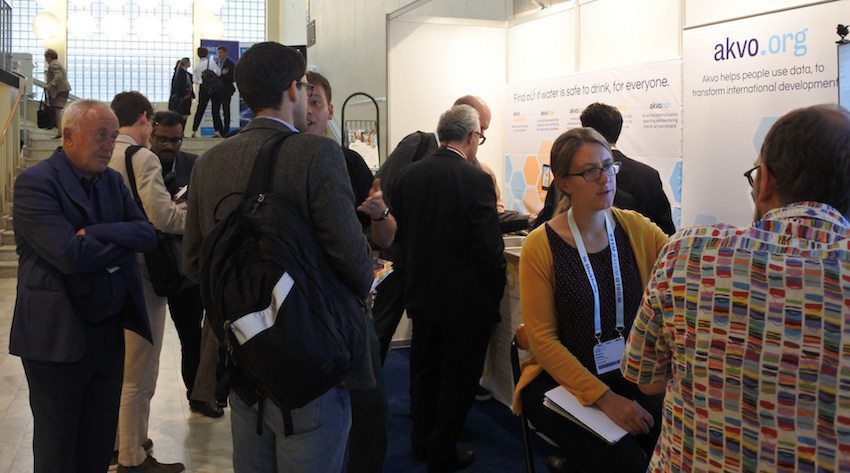 The applications for Caddisfly are clear and numerous, from ensuring water safety following disasters and incidents of pollution, through to regional water point mapping and monitoring exercises, planning agricultural irrigation and managing waste-water quality from factories, to name a few. For this reason, many different types of organisations talked to us during the event and were keen to find out more about using Caddisfly. Which all kept this year’s event team very busy.

But Caddisfly is just the tip of the Akvo iceberg, really. For the water and agriculture sectors in particular, it’s a no-brainer entry point into the Akvo eco-system of tools and services designed to give people a better understanding of their work and its impact, and to empower them to improve it. It’s not the only entry point by any means, but it’s the most tangible and easy to grasp – literally as well as metaphorically – and it’s particularly relevant for the SWWW crowd. So conversations about Caddisfly usually lead to discussions of our other tools, each playing an important part in the continuum from data to decision. This meant we had quite a bit of interest in our preview of Akvo Lumen, our new platform for working with and understanding data.

Above: Thomas Bjelkeman presenting Akvo Lumen at a preview event on the Akvo stand on 30 August. Photo by Jo Pratt.

Citizen observatories
Together with Earthwatch, UNESCO-IHE and the Stockholm Resilience Centre, we took part in an event called Improving water stewardship and livelihoods through citizen observatories. This looked at the opportunities for citizen science to foster more sustainable management of water supplies and aquatic ecosystems. It took place on the day our new joint initiative called Ground Truth 2.0 officially launched. Below is a video playlist of this event. The first video also explains Ground Truth 2.0 project (it’s a citizen science venture designed to link data to policy).
Dutch water sector reception
As in previous years, together with our partners IRC, NWP, Aqua for All, and the Dutch Ministry of Foreign Affairs, we helped to host a party at the Netherlands embassy in downtown Stockholm for 150 invited guests. As usual, there were many people who wanted to come than physical capacity at the embassy, so we had to close the list of invitees early on, to the disappointment of more than 300 people. This year, a small ceremony took place at the event to thank the Dutch government for its help in the ebola crisis in Liberia, Sierra Leone and Guinea. 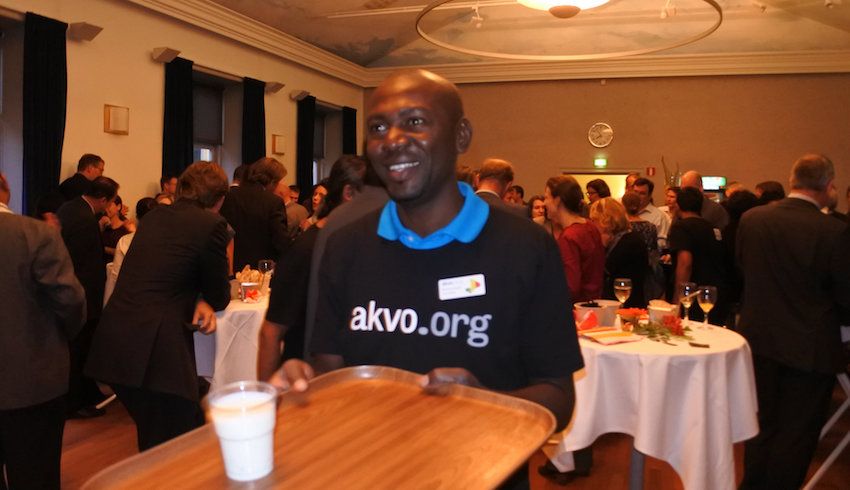 Above: Banzoumana Coulibaly of Akvo’s Mali office helps serve food while the reception at the Dutch embassy is in full swing. Photo by Jo Pratt.
Below: (updated 9 September 2016) South African TV station SABC filmed Caddisfly for the national TV news. You can view the item here (1.40 minutes in).

So, Stockholm World Water Week is over for another year, but the follow up activities from all the new contacts made are just starting, and will involve many different parts of our organisation around the globe. Time well spent.

Jo Pratt is communications manager at Akvo, based in the UK. You can follow her on Twitter @jo108.