The ambassador of the oceans has a message for us 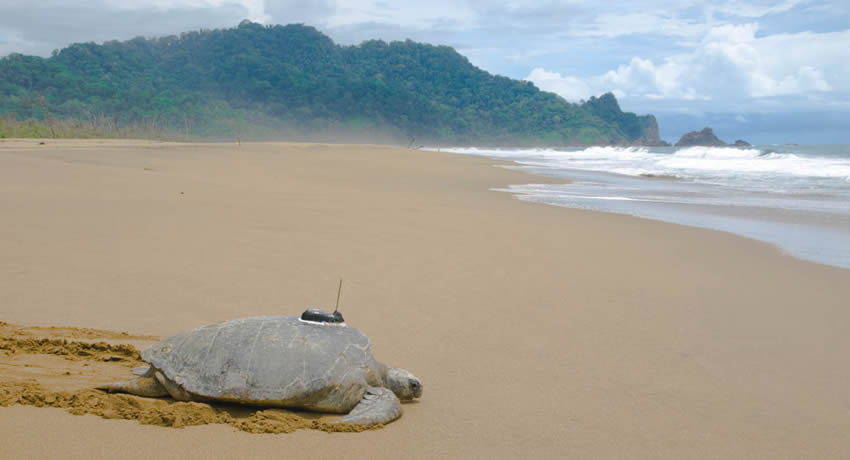 It’s 2.00am and dark. The moon is undergoing an eclipse and although the stars are bright, it’s not enough to dispel the darkness. There is the sound of the breeze stroking the palm trees mixed with the sound of waves hitting land, but apart from that, all is very quiet. A giant Chelonia mydas emerges silently from the sea and makes her way through some debris, crawling across the sand. For the green sea turtle, and most other sea turtle species, dry land is not a friendly place to go if you’re a creature with flippers. But this part of the lifecycle is a must, otherwise generations will be lost. Finally, after a quarter of an hour looking for a nesting spot, the 100kg creature is digging a hole 40-60cm deep and 30cm round in which to lay her eggs.

When I was first asked to witness the sea turtle nesting activity, I thought it would be like watching a hen laying eggs, but I was completely wrong. Sea turtles are extremely sensitive to light, but luckily for me, I was told that their hearing is quite poor, so whispering while watching them is still allowed. Many conservationists, especially those who work in this type of reptile conservation, can be hard to reach during the day. They’re awake mostly from dusk to dawn, especially during the peak nesting season which lasts two to four months a year. The work for them is a speedy race against egg poachers, and now it is worsened by coastal abrasion due to rising sea levels. 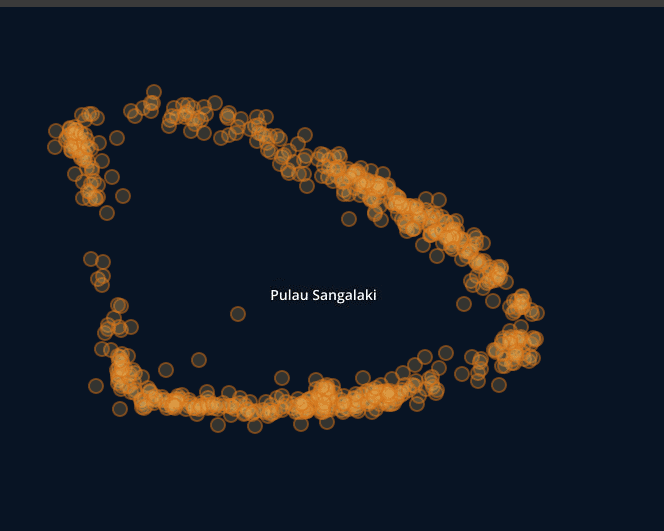 Top: having finished laying her eggs, a female green sea turtle tagged with a satellite tag rushes towards the sea. This satellite monitoring work is being carried out by WWF-Indonesia. Nov 2011, Sukamade Beach, East Java. Photo by Aulia Rahman.
Above: About a thousand nesting sites of sea turtles have been monitored using Akvo FLOW in Sangalaki Island and Derawan, East Kalimantan, Indonesia. The dots on this map created a visual urgency to protect this site for the future. The work here is carried out by WWF and related stakeholders, you can find out more here.

Marine biologists believe that only one in every 1,000 sea turtle hatchlings survives into adulthood. The main threats are from egg consumption, meat consumption, pollution in the sea, and by-catch in the fisheries industry. The rest are lost to natural predators.

If the one survivor is a female, she will come back to the beach where she was born to lay her own eggs. Males never return. It is important for conservation to make sure the females have a clear path to their nesting beaches. This involves making sure no trawlers or long line fishing vessels are blocking their way, and most importantly, that the beaches are kept quiet and un-developed, otherwise they will not return at all, and will just dump their eggs in the ocean.

The female sea turtle is born with the ability to track the earth’s magnetic direction, and can sense the sand of the beach where she was born. This capability starts, incredibly, as soon as she hatches and is called ‘imprinting’. The new hatchlings do a ‘swimming frenzy’ until they run out of the yolk which they carry on their belly. After ending the swimming frenzy stage, the sea turtle enters its ‘lost years’; scientists have very little information about what they do or where they go for the next 10-20 years. 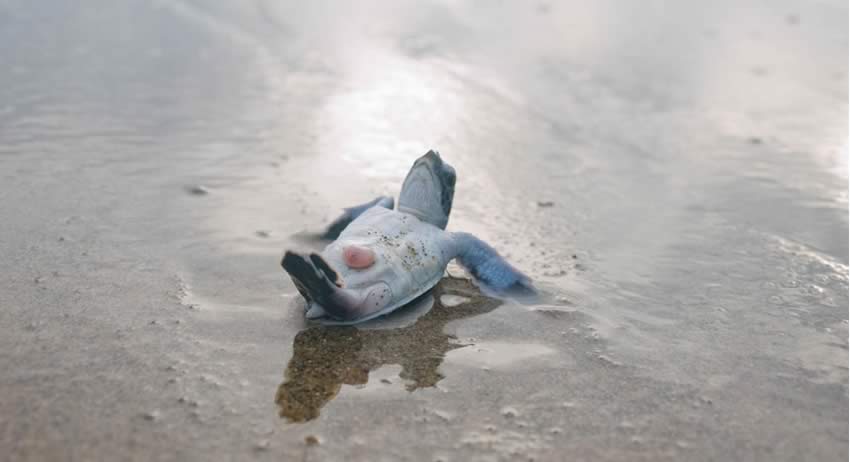 Above: a hatchling slips over while running for the waves, showing us the yolk sac on its belly. It is their natural preparation to carry them through the imprinting and swimming frennzy stages. Little is known about what they do and where they go after the end of the swimming frenzy stage. Nov 2011, Sukamade Beach, East Java. Photo by Aulia Rahman.

The ambassador of the oceans
The conservation work on sea turtle protection and related issues such as the fisheries industry, shoreline development and eco-friendly tourism, keeps growing, and most of the time – like the creature itself which swims across national boundaries – it involves multi-country initiatives. This is why mapping nesting sites, breeding and feeding grounds – which can span several countries – is so fundamentally important to the diplomacy and advocacy work involved in sea turtle conservation.

So it is not an overstatement to say that the sea turtle is truly an ambassador of the oceans. It not only bridges ecosystems, but also brings together numerous organisations and entities involved in diplomacy and conservation work. The importance of mapping these marine ambassadors has prompted WWF-Indonesia to get involved in new kinds of work, involving managing large-scale databases and open-government data for sustainable development with Akvo. For Akvo, the engagement with WWF-Indonesia and its conservation-related work is an interesting new field of activity and it’s gratifying to see Akvo FLOW being used in this way. The future of this elegant and important species is in the balance and mapping its life cycle may just help to tip the scales favourably.

Aulia Rahman is a consultant at Akvo, based in Indonesia.