Last year just before the Christmas break, we received the good news that USAID had approved a two-year proposal submitted by the Millennium Water Alliance in Kenya called the Kenya Arid Lands Disaster Risk Reduction – WASH (or KALDRR-WASH). It aims to improve access to water, sanitation and hygiene (WASH), while at the same time increasing resilience to drought and flash floods for the people that live in the arid regions of Northern Kenya.

The Millennium Water Alliance (MWA) members participating in the programme are CARE Kenya, World Vision Kenya, Food for the Hungry (FH) Kenya, and Catholic Relief Services (CRS). There is also a Dutch consortium involved, which is represented by Aqua for All, Acacia Water, and IRC.

Within the KALDRR-WASH programme both our mobile phone-based field monitoring service Akvo FLOW and Akvo Really Simple Reporting (RSR) are being used, for monitoring and reporting respectively. However in this blog I’m concentrating on what we’ve done so far with Akvo FLOW.

Above: Screenshot of the map from the Akvo FLOW dashboard of data that was collected in the MWA programme in Kenya.

The counties in Northern Kenya where the programme is being implemented are Turkana, Marsabit, Isiolo, Wajir, Moyale, and Garissa. Each implementing partner (IP) is active in a specific county. At the outset, a baseline study using Akvo FLOW had to be undertaken in each county, and before that could happen, training workshops were needed for both field staff and enumerators so that data collection could be undertaken efficiently.

These Northern regions in Kenya provided us with some extra technical challenges. Firstly, mobile phone coverage is very limited there. Secondly, a functioning power source is also lacking in most cases, meaning the phones would run out of juice very quickly. We adapted the way we do our training and how data was collected in the field to accommodate these issues. 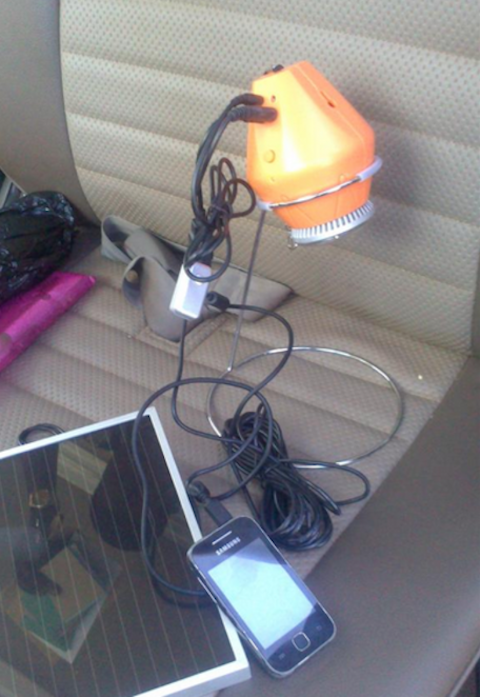 Above: the solar kit each enumerator had with them during data collection.

To address the mobile phone coverage issue, we instructed the enumerators to collect all the data with their phones on flight mode so that all the surveys were saved on their phones. Once they were back at their office where a good WiFi or mobile phone connection was available, they could turn flight mode off again and the data would be transmitted.

To overcome the power issue, we experimented with the use of solar kits for the very first time. Each enumerator went out into the field armed with a smartphone and solar kit comprising of a solar panel for charging a battery that can also be used as a light. This allowed enumerators to charge their smartphones while travelling or later at night after the data collection was done for the day.

These solutions turned out to work perfectly. We did however have some issues with not all of the pictures being transmitted. To compensate for this, we collected all the data that was stored on the SD card of each phone once the data collection was complete. 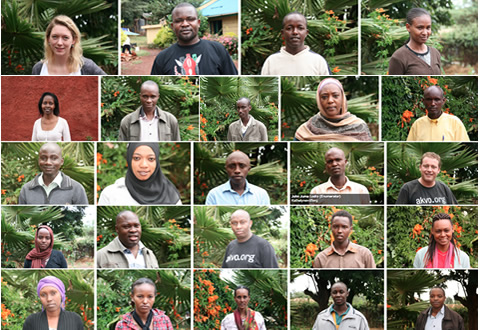 Above: training participants from FH Kenya at the Marsabit workshop.

Below: participants from World Vision Kenya at the workshop in Turkana.

Bottom: participants from CRS and CARE at the workshop in Embu.

The first training workshop we organised was for FH Kenya staff and enumerators in Marsabit. Our partner operations manager Kathelyne was able to join us on this occasion, and blogged about it here. Within this programme FH Kenya is active in the counties of Marsabit and Isiolo. After our workshop they managed to collect all the data within two weeks. In total 345 surveys were collected in Marsabit and 165 surveys in Isiolo. 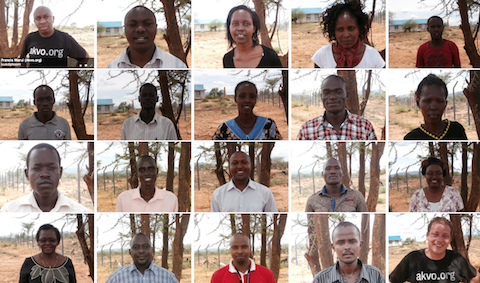 The second training workshop we did was in Kainuk in Turkana County with World Vision Kenya staff and enumerators. After the training they too managed to collect the data within two weeks. In total 265 surveys were collected in Turkana.

The last workshop we organised was in Embu with CRS and CARE staff and enumerators. This location was chosen due to security concerns, especially in Garissa, due to the ongoing violence in the area. It took CARE and CRS a little bit longer to collect all their data, as we had some problems initially with the surveys that were setup on the phones. CARE collected data in Garissa and Moyale, while CRS collected data in Wajir County. In total 168 surveys were collected in Garissa, 38 surveys in Moyale, and 151 surveys in Wajir.

After some of the workshop sessions we filmed videos with the participants. You can watch them on the YouTube playlist below.

To summarise, in less than a month all the data collection was done, with a grand total of 1132 surveys submitted by the various partners. Given the circumstances in which the data was collected, this is really a remarkable feat. It is household data, so too sensitive in nature to publish openly yet. We are however planning on filtering out the sensitive data and publishing the results online, together with the data analysis report.

The programme is active until the end of 2014. Next steps are to get the various partners using Akvo RSR and to do follow-up FLOW exercises to monitor its success. It’s been a really exciting journey, where we’ve been testing the frontiers of what mobile phone technology can do to the absolute limit.

Luuk Diphoorn leads Akvo’s East Africa Hub, and is based in Nairobi