Walking for Water in the Netherlands 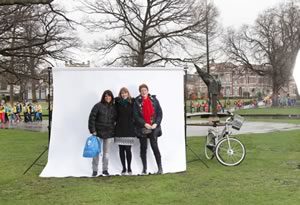 Who
Wandelen voor Water (Walking for Water) is an annual fundraising and awareness campaign involving school children run by Dutch foundation Aqua for All.

A long-term strategic partner of Akvo, Aqua for All’s aim is to sustainably increase the number of people with access to clean water and adequate sanitation. It does this by acting as a connector, facilitator and programme developer for projects regarding safe drinking water and sanitation. Like Akvo, Aqua for All doesn’t implement projects, but empowers others to do so. It’s brought over 160 projects online with Akvo RSR and is helping us deploy Akvo FLOW in other consortia programmes like Football for Water.

Many organisations take part in Walking for Water. These include NGOs galvanising support for their projects, community organisations such as Rotary clubs that co-ordinate fundraising events in their regions, water utility companies, city governments and hundreds of schools. Around a third of the hundreds of Walking for Water events that take place each year across the Netherlands and around the world are organised by Rotary clubs, with most of the rest staged by NGOs.

What
Walking for Water teaches children in developed countries what it’s like to live without adequate access to drinking water and sanitation, while giving them a way to raise money to help tackle water issues. School children aged 10-15 are sponsored by friends and family to walk six kilometres while carrying six litres of water in a backpack, giving them a glimpse of what daily life is like for their counterparts in other countries. Six kilometres is the average distance people walk every day to fetch water if they lack access to an improved water source, and the need to spend so much time and energy fetching water prevents many children from going to school. 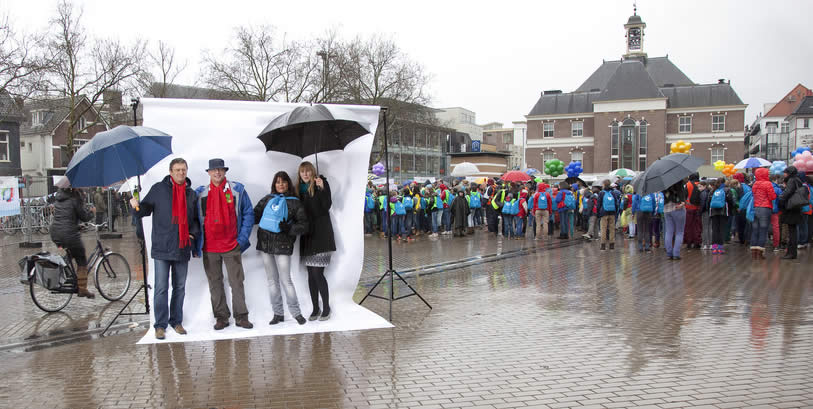 Schools taking part in Walking for Water can choose a project featured on Akvo RSR to fund with the money they raise and watch it unfold online. This helps them to feel directly connected to the people benefiting from the project they support.

Walking for Water began in 2003 and has grown in popularity every year. In 2014, 35,500 children in 11 countries took part in a Walking for Water event, raising Euro 1.3 million for 31 water projects in Africa and Asia. The total sum raised by Walking for Water since its inception is around Euro 7.2 million.

The Walking for Water event pictured here took place on a very wet afternoon in March in Apeldoorn, a city in Gelderland, in the centre of the Netherlands. More than 1,000 children from local schools joined the walk which was organised by the Rotary Club of Apeldoorn ‘t Loo and was twinned with a walk happening simultaneously in Kent, South East England, organised by the Rotary Club of Chestfield. These two events raised funds to support a water training centre in Malawi, a project that is co-ordinated and partly funded by Connect International. Four Walking for Water events in total – including ones organised by Bergh and Duiven Rotary clubs in the Netherlands – chose to support this project, together raising around Euro 68,000.

If you decide to ‘Walk for Water’, you probably shouldn’t be surprised if you get a lot of heavy rain! But the weather conditions made this particular event and the Akvo partner hero photo shoot rather tough going for all participants. Below is a behind the scenes view of the photo shoot filmed by Josje Spierings, project officer at Akvo, which gives a good feel of conditions on the day.

Jo Pratt is communications manager based at Akvo’s London hub.