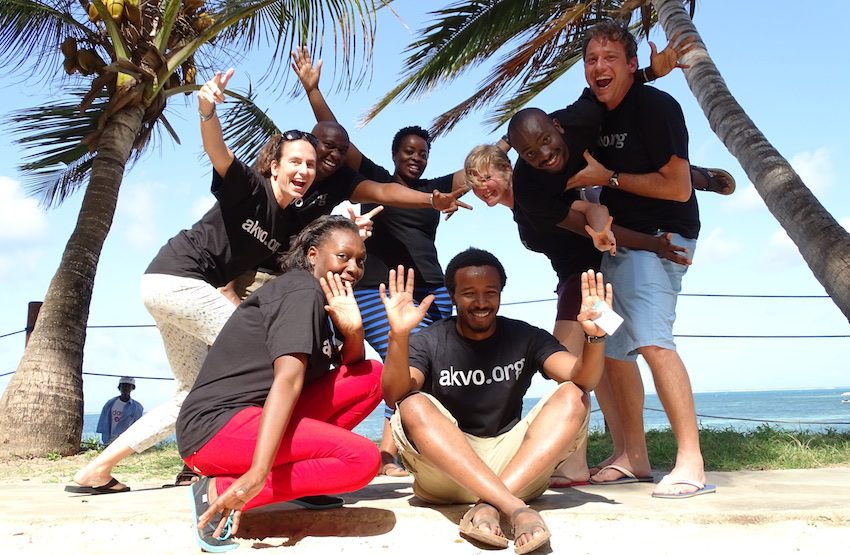 Above: The complete Akvo East Africa team, as when the picture was taken in Mombasa, Kenya in June 2016.

In April 2012 I left Amsterdam and flew out to Nairobi to embark on my new exciting East Africa adventure for Akvo. Fast-forward to now five years later, I’m nearing the end of that amazing journey. In about two months time, so mid-June 2017, I will be moving back home to the Netherlands to start out on another adventure, but this time back in Akvo’s headquarters in Amsterdam.

With the end now clearly in sight I felt it was a good opportunity to reflect a bit on what we have achieved in those years. I do want to stress that it was a huge team effort from Akvo globally and regionally. There is no way that I could have done any of this by myself.

There sure has been an awful lot that has happened over the years, and looking back now it certainly feels like ages ago since I stepped on that KLM 747-400 flight from Schiphol Amsterdam to JKIA Nairobi on 04-04-2012. 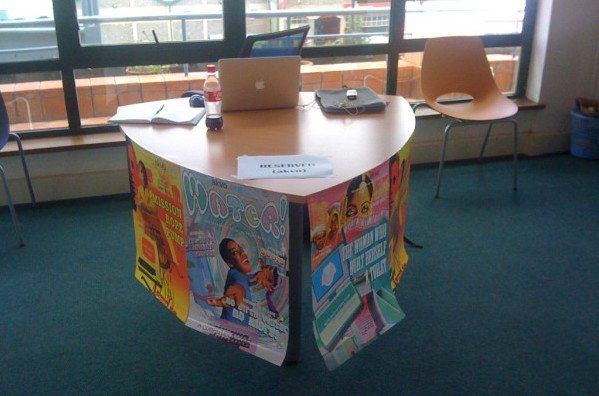 Above: My desk at the Nailab in 2012, courtesy of Sam Gichuru. Photo by Luuk Diphoorn.

The beginning of Akvo’s hub network

The whole concept and thinking behind the establishment of our hub office in Kenya had actually been in the works for some time already. It all started in November 2010 when we received the great news that both of the MFS2 Alliances that we were a part of, namely the Dutch WASH Alliance and Connect4Change consortia, were awarded. It was the first time that we were involved in these types of multi-year programmes, which meant we had some substantial funding available for a longer period of time (2011 to 2016). Adding to that, it had also become apparent that the biggest needs and opportunities were for us to further support our partners in the use of our tools in the countries where their actual programme activities were being carried out.

I had done my homework and taken a closer look at the countries where both the MFS2 consortia would be active, and the East Africa region was the one with the most overlapping countries of Kenya, Uganda, and Ethiopia. With already having my parents and also my brother being based in Nairobi, I felt confident enough to take up the challenge and move out to Kenya.

As this was the first time that Akvo was expanding to include the setup of a local presence outside of Europe and the US, I think it is fair to say that this was the start of our current global hub strategy.

Above: Our first official stamp at Akvo, which we needed to get made to register ourselves in Kenya. Photo by Luuk Diphoorn.

Following are some highlights of the past five years.

After my arrival in April 2012 I spent the initial months adjusting somewhat to my new life in Nairobi. I was fortunate enough to have a work space from day one. Via our friends of the 1%Club, I was able to get in touch with Sam Gichuru, who is co-founder and director of the Nailab and now our board member of Akvo Kenya Foundation. I had my own small desk that Sam reserved just for me, and which he tactfully had placed on the main stage, so that visitors to the Nailab would see me first, and of course initially approach me. Meanwhile Sam had conveniently hidden himself in a corner behind one of the pillars. It was a running joke that lasted for some months, until I moved off that main stage.

Above: The first training workshop for Akvo Flow took place in Kenya, for the WASH Alliance Kenya partners in Kajiado. Photo by Amitangshu Acharya.

From 2012 onwards we had a very exciting new tool at Akvo, namely Akvo Flow. Flow was originally developed and hosted by the US-based NGO Water for People. In March 2012, Akvo signed an agreement with Water for People to take over the tool and its further development.

With this new tool also came a sharp increase in the demand from our partners for more local support, particularly in the form of training in the use of the tool. Fortunately for me, Flow had already been used somewhat in Kenya, and I found someone who had taught himself everything there was to know about it. In January 2013 Francis Warui was the second person to join the Akvo Kenya team.

At the same time, Amitangshu Acharya was busy setting up the Akvo South Asia Hub in India. He too was dealing with this sudden increase in demand for the Flow tool in his region. We therefore decided to have a hub exchange visit between Kenya and India in August 2012. Amit joined us in Kenya for about three weeks, and helped facilitate our very first Flow training session in Kenya.
This workshop formed the basis of all future Akvo Flow training exercises, and was therefore also key to our current working model to provide training and support.

This training session in Kajiado pushed the boundaries of what was possible in terms of technology. As Amit very nicely expressed it in his blog: “It was also perhaps not the best site. First of all, the training hall had only two working power outlets, and we needed to run 20 laptops on power throughout the training (including the LCD projector). A complicated set of extension cords was brought into play, but a fear of sparks flying kept us on tenterhooks.”

Although Amit left Akvo in September 2015, most of the core components he developed for undertaking Akvo Flow training are still very much valid now. 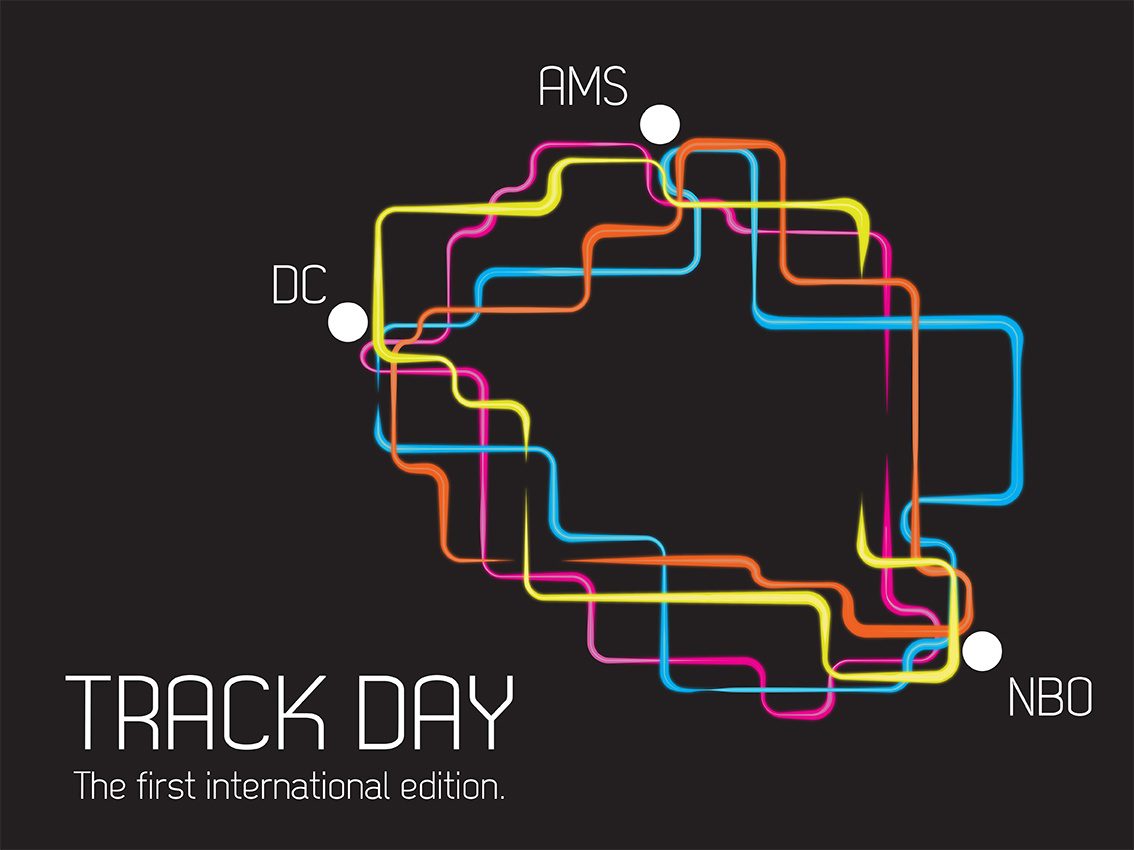 Above: The flyer of our first official international Track Day held on the 23rd of May 2013 in Amsterdam, Nairobi, and Washington DC. Graphic by Linda Leunissen.

One of the many crazy and successful concepts that Akvo’s co-founder and former communications director at Akvo, Mark Charmer conceived is the Akvo Track Day event. The first one was held in March 2012.

In May 2013 we decided to organise the first international Akvo Track Day, with concurrent events at our HQ in Amsterdam,Nairobi and Washington DC. This was possible because by then our operations in East Africa had steadily increased to a point where we had  numerous locally-based Kenya partners using our tools in their programmes. We also treated it as our unofficial Akvo Kenya launch party. My partner-in-crime and best of friends at Akvo, Mark, aka ‘Shaggy’, helped pull the whole event together, and also attended the event in Nairobi. I can’t even begin to express the positive influence that Mark has had on me over the years, and I still miss him dearly. 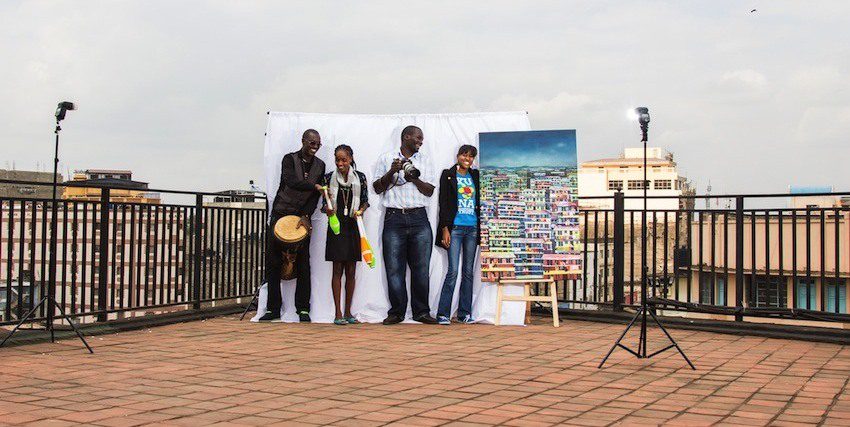 Above: Akvo heroes’ photo-shoot with Sarakasi Trust, one of the partners and programmes that the Netherlands Embassy in Kenya supports. Photo by Mwarv Kirubi.

Soon after I moved to Kenya, we also formally further strengthened our partnership with DGIS, the Dutch Ministry of Foreign Affairs, via the PPP3 programme  covering a range of activities including some in East Africa. One of the main agreed deliverables was to get a number of Dutch embassies to showcase their water related projects on Akvo RSR.

By November 2014, after several discussions, meetings, and training exercises at the Dutch embassy in Nairobi, we were able to successfully publish the embassy’s full project portfolio online on Akvo RSR, including all their non-water related projects too. To celebrate that fact, in May 2015 we held an official launch event at the Embassy.

In 2016 we also supported the Dutch Embassy in Mozambique to do the same. All of the projects in Kenya and in Mozambique remain online in RSR, and local partners are continuing to use RSR/IATI to report on their activities.

When I started working at Akvo in 2008, I actually collected the very first projects from our initial Dutch NGO partners to put online on RSR. The use of RSR has definitely come a very long way since then, with now Embassies and other multilateral agencies posting their entire portfolios online themselves. 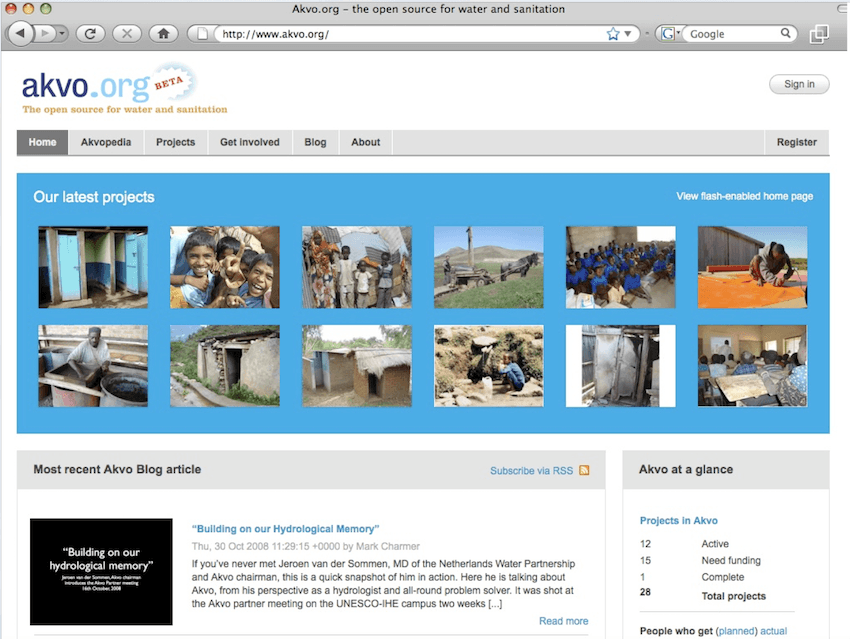 Above: the homepage of Akvo RSR which had 28 projects in 2008, which were manually added by Luuk.

5. Use of Akvo Flow to collect data at scale for national WaSH databases

In 2014, Flow was used in the Somali region of Ethiopia to collect data for the National WASH Inventory. A year later, with the support from the World Bank’s Water and Sanitation Program (WSP), we undertook a nationwide household data collection on sanitation in Tanzania. In a period of around four months around 50,000 points were collected. In both of these initiatives very valuable lessons were learned on how to undertake large-scale data collections using Flow. 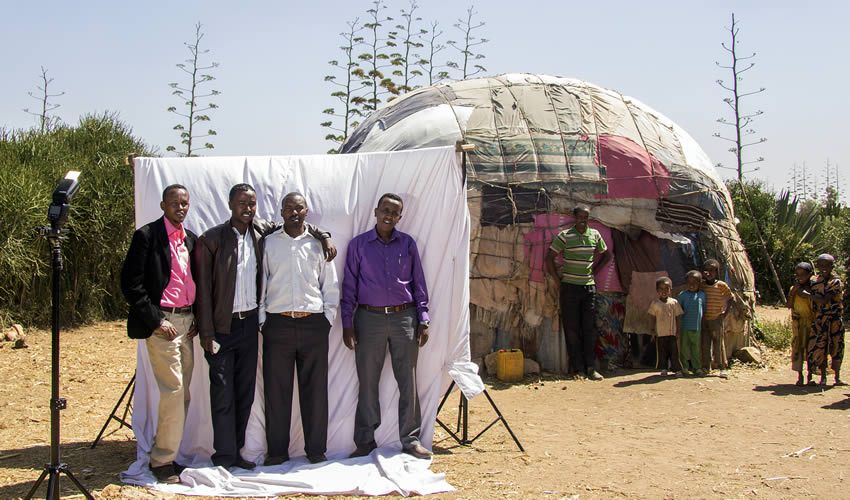 Above: Akvo heroes’ photo-shoot with UNICEF and the Regional Water Bureau (RWB) in Somali region of Ethiopia. Photo by Mulugeta Ayene.

In 2015, we embarked on another nationwide data collection exercise using Akvo Flow, this time in Nigeria, to update the country’s national WASH database. In about six months we managed to collect a staggering 350,000 points. This still remains the largest data collection effort  undertaken with Akvo tools on the African continent.

In 2016 we worked with UNICEF, World Vsion, Oxfam GB, and MoWIE to help monitor the drought in Ethiopia caused by El Nino. By extensively using Akvo Flow’s monitoring feature, we were able to closely monitor the impact the drought was having on existing waterpoints. Data collection lasted four months, from January to April 2016, covering 34 woredas, in 16 zones. We also set up an automatic linkage between Akvo Flow and CartoDB systems, so that the data could be analysed and visualised immediately. This helped in decision-making and additional water trucking activities were triggered as a direct result. This is the only example that I know where Flow’s monitoring feature was used at this scale, and also where data was immediately used for decision-making purposes. We are currently engaged in a very similar effort with UNICEF and IRC in again the Somali region of Ethiopia to monitor the on-going drought.

6. It’s all about the people

The best of all this was of course the pleasure of getting to work with all those different people in many different organisations over the years. I consider myself also so fortunate to have been able to build up a team from scratch. This is the entire Akvo East Africa team that I had the pleasure to work with directly in order of joining:

So many Akvo colleagues from across the world also came and visited us – I count around 20 different people. We also had Siem Vaessen who joined us for about a year in the Nairobi office, and who we at the time considered as an ‘Akvo Lite’ extension of our team.

We’ve known of course for some time in advance that I would be returning to the Netherlands and have been interviewing to appoint my successor. I’m happy to be able to officially announce that Walter van Opzeeland will be the new acting hub manager for East Africa! I do believe I am leaving him behind a very sturdy and self-sustainable foundation, and a great team of people to work with.

I’m so grateful for the support that I received from Akvo’s management team to allow me to undertake this adventure in Kenya. I’m really proud and pleased with what we have achieved here together in the past five years. The gamble that was taken at the start has clearly been worth it! For me, the coming months mean my farewell to East Africa. It’s still a bit unreal, and I don’t expect it to fully sink in until I’m back in the Netherlands.

Luuk Diphoorn is hub manager of Akvo’s East Africa hub, based in Nairobi. You can follow him on Twitter @luukdiphoorn